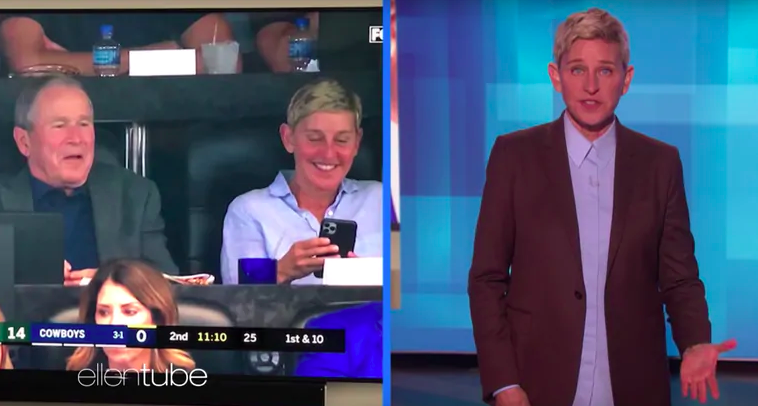 Yes, that was me at the Cowboys game with George W. Bush over the weekend. Here’s the whole story. pic.twitter.com/AYiwY5gTIS

Ellen DeGeneres is perhaps one of the most beloved stars in Hollywood. I mean, here you have this out (and proud) lesbian taking over televisions across the country, including in red states. People who don’t think she has a right to get married are probably online right now trying to get tickets to her show. She truly appeals to everyone.

But on Sunday, she pissed off her liberal fanbase by attending a Dallas Cowboys game with former president George W. Bush.

A photo of Ellen and Bush laughing together was spread online and people on Twitter were going in hard. There were several tweets like this…

Us: “George Bush is a war criminal who is responsible for the deaths of a multitude of brown ppl in foreign lands while killing American soldiers for a fruitless war based on a lie.”

Ellen: “SOMETIMES WE GOTTA REACH ACROSS THE AISLE!”

Even some celebrities were hating on Ellen. This one photo received so much attention. It didn’t exist just in Twitter land. It spread throughout all online channels.

Eventually, Ellen couldn’t ignore it. She decided to address the issue on her show.

When we were invited, I was aware I was going to be surrounded with people from very different views and beliefs—I’m not talking about politics. I was rooting for the Packers and get this—everybody in the Cowboys suite was rooting for the cowboys. I had to hide my cheese hat in Portia’s purse.

During the game, they showed a shot of George and me laughing together and, so, people were upset. They thought, ‘Why is a gay Hollywood liberal sitting next to a conservative Republican president? Didn’t even notice I’m holding the brand new iPhone 11.

It’s interesting. In the video, she says she was invited by Jerry Jones’ daughter to the game. So it’s not like Bush invited her. Basically, she was invited to an event and happened to be sitting next to Bush.

I’m not sure what people expected her to do. Pretend like he doesn’t exist? Yell at him? Put him under a citizen’s arrest? We’ve all been at a dinner or a party where we’ve had to interact with people we might not like.

Hell, Thanksgiving is coming up…that’s primetime for eating with people you hate. And we all know the best way to get through the day is to not address anything. Keep everything inside. Eat food, drink alcohol, laugh, and pretend like you don’t all hate each other. It’s good for the soul.