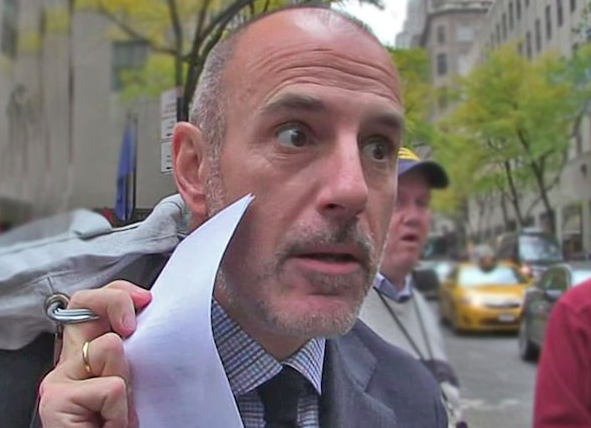 Matt Lauer Claims Rape Allegations Are False, Says The Women Are Too Afraid To Admit They Cheated…WHAT?

Matt Lauer has obviously given up all hope of returning to television, because he just released a bizarre statement in response to the rape allegations against him.

As you all know, Lauer was fired from NBC back in 2017 after multiple sexual misconduct allegations were released. There was a lot of evidence. Several women, several creepy interview tapes, several sources, etc.

I mean, just take a look at this leaked clip. Tell me this dude ain’t a creep! The look on his face is filled with some sinful desires.

Anyway, we’re talking about this dude again because of Ronan Farrow’s new book, in which a woman named Brooke Nevils claims Lauer anally raped her back in 2014 inside his hotel room at the Sochi Olympics.

Nevils — a former NBC producer — claims she and Matt had several drinks together one night, and that on two separate occasions … she went up to his hotel room. During that second visit, Nevils alleges Matt pounced on her, put her on the bed and penetrated her.

In the book, Ronan says Nevils told him she repeatedly said ‘no’ during the alleged rape.

It’s important to note here that Nevils does admit to going back to Lauer a few times following this incident.

Back in New York City, Nevils had more sexual encounters with Lauer. ‘Sources close to Lauer emphasized that she sometimes initiated contact.’ What is not in dispute is that Nevils, like several of the women I’d spoken to, had further sexual encounters with the man she said assaulted her. ‘This is what I blame myself most for,’ she says to Farrow. ‘It was completely transactional. It was not a relationship.’

She told Farrow that she was terrified of the control Lauer had over her career at NBC, which makes sense. Lauer was the face of NBC. He made the company millions of dollars. People loved this dude, which is why it was such a shock to see them fire him.

Lauer responded to this new rape allegation by blaming everyone but himself.

In a new book, it is alleged that an extramarital, but consensual, sexual encounter I have previously admitted having, was in fact an assault. It is categorically false, ignores the facts, and defies common sense.

There was absolutely nothing aggressive about that encounter. Brooke did not do or say anything to object. She certainly did not cry. She was a fully enthusiastic and willing partner. At no time did she behave in a way that made it appear she was incapable of consent. She seemed to know exactly what she wanted to do. The only concern she expressed was that someone might see her leaving my room. She embraced me at the door as she left.

This dude right here. I don’t know, man. Obviously women can (and have) lied in the past about being raped, but the number is low. Most women who come forward are telling the truth. In most cases, it doesn’t benefit them in anyway to admit to being raped. They know people are going to accuse them of being a “slut.” They know a lot of people will say they’re just trying to get money or clear their name.

So it’s not like women are just champing at the bit to accuse dudes of rape. Do false accusations happen? Of course. Should every claim be investigated? Of course.

But when it comes to Lauer’s creepy a**, excuse me if I believe the victim first. This dude comes across as an extreme narcissist.