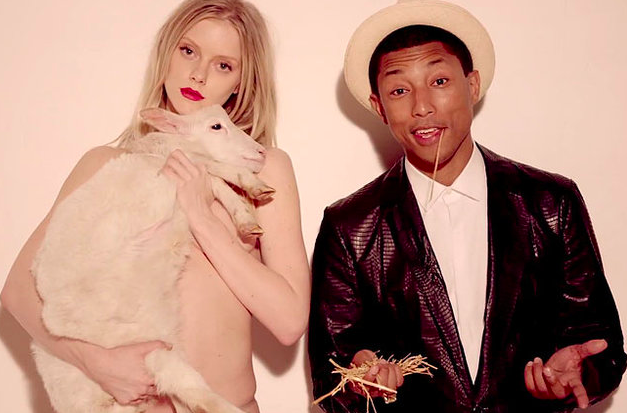 Pharrell Says ‘Blurred Lines’ Changed The Way He Thinks About Our Culture, Regrets Some Of The Lyrics

‘Blurred Lines‘ was a hit track. Robin Thicke released the song as the lead single from his album of the same name. He wrote the song with Pharrell Williams.

And even though the song was a major hit, it also generated a fair amount of controversy. A spokeswoman for Rape Crisis told The Independent the following…

More disturbingly, certain lyrics are explicitly sexually violent and appear to reinforce victim-blaming rape myths, for example about women giving ‘mixed signals’ through their dress or behaviour, saying ‘no’ when they really mean ‘yes’ and so on.

Add to the fact that Robin Thicke already has this weird rapey vibe about him, the whole thing felt a little weird.

At first, Pharrell didn’t see anything wrong with the song or its lyrics. He saw “older white women” getting up and dancing to the song. People were loving it, but then he actually listened to the other side.

So when there started to be an issue with it, lyrically, I was, like, What are you talking about? There are women who really like the song and connect to the energy that just gets you up. And I know you want it—women sing those kinds of lyrics all the time. So it’s like, What’s rapey about that?”

And then, I realized that there are men who use that same language when taking advantage of a woman, and it doesn’t matter that that’s not my behavior. Or the way I think about things. It just matters how it affects women. And I was like, Got it. I get it. Cool. I cared what they were feeling too. I realized that we live in a chauvinist culture in our country. Hadn’t realized that. Didn’t realize that some of my songs catered to that. So that blew my mind.

These days, Pharrell admits to being embarrassed by some of the sh*t he used to write in his younger days. “It just took a lot of time and growth to get to that place.”

It’s not all bad for Pharrell, though. Several months after ‘Blurred Lines’ he wrote a little song called ‘Happy’ which was originally supposed to be for CeeLo Green, “I don’t have the capacity to write that kind of song for myself. When I do songs for myself, they’re always too complicated, and too smart, with six bridges. Because I’m weird like that.”

But Pharrell ended up taking the track, recording it himself and releasing it as the lead single from his second studio album.

That made me cry. It literally made me cry. Like, I was on the Oprah show for my birthday, and she showed me a video of people around the world singing that song, and that shit [email protected]!ked me up. Bad. I was never the same.