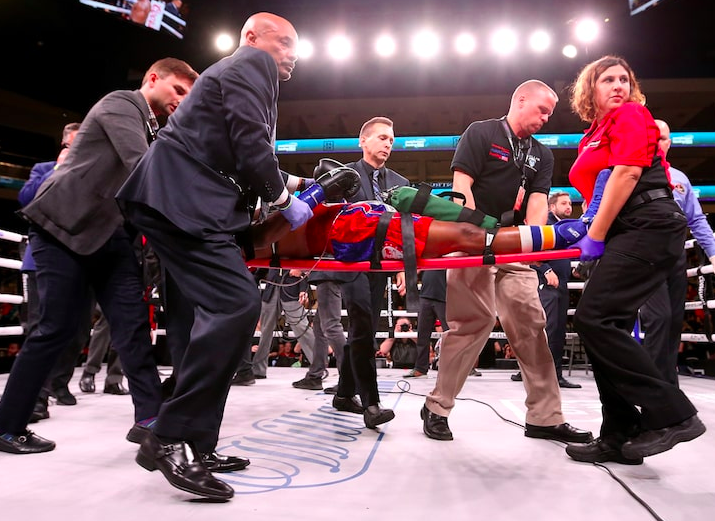 You can press play on that video if you want, but I must warn you that it’s brutal to watch, especially with the knowledge that the boxer in question, Patrick Day, ended up dying from his injuries.

For those who don’t know, junior middleweight boxer Patrick Day was facing off against the unbeaten Charles Conwell on Saturday night at the Wintrust Arena in Chicago.

During the fight, Day was knocked down three times, and during his third fall, his head bounced against the canvas hard. He was out cold and had nothing breaking his fall. In the video, you can his eyes are rolled back in his head and he appears to be having trouble breathing.

He was taken out of the ring on a stretcher and transported to the hospital. Sadly, he never regained consciousness, and at one point had a seizure before falling into a coma.

Day fought for days but ultimately succumbed to ‘the traumatic brain injury’ he suffered during the fight and was pronounced dead on Wednesday. He was surrounded by close friends, family and members of his boxing team.

As you can imagine, his opponent Conwell is having a difficult time dealing with this. Two days before Day’s death, Conwell wrote an emotional letter to Day on social media.

I never meant for this to happen to you. All I ever wanted to do was win. If I could take it all back I would. No one deserves for this to happen to them. I replay the fight over and over in my head thinking what if this never happened and why did it happen to you. I can’t stop thinking about it myself. I prayed for you so many times and shedded so many tears because I couldn’t even imagine how my family and friends would feel. I see you everywhere I go and all I hear is wonderful things about you.

It’s just an incredibly sad event all around. You feel for Day’s family and friends, and you also feel for Conwell, who might not ever be the same after this incident. There’s no way you can step back in the ring and just forget about what happened. It’ll always be there.

Day’s promoter, Lou DiBella, released the statement you see below…

He was a son, brother, and good friend to many. Pat’s kindness, positivity, and generosity of spirit made a lasting impression with everyone he met. Patrick Day didn’t need to box. He came from a good family, he was smart, educated, had good values and had other avenues available to him to earn a living.

He chose to box, knowing the inherent risks that every fighter faces when he or she walks into a boxing ring. Boxing is what Pat loved to do. It’s how he inspired people and it was something that made him feel alive.