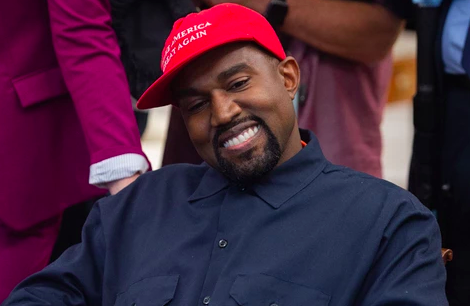 Kanye West invited Apple Music Beats 1’s Zane Lowe to his Wyoming ranch on Tuesday for a long interview. They reportedly talked for three hours, which is not exactly surprising when it comes to Kanye.

The interview is being released today (Oct. 25) on YouTube, and in the interview, Kanye sounds more conceited than ever. I truly believe he’s one year away from believing he’s God. That’s not a joke. In one year, he will announce that he’s God.

As some of you may know, he’s all Christian now. He’s trying not to curse and has requested people to not curse in front of him.

I think and feel differently now, now that I’m Christian, now that I’m founder of a 3 billion dollar organization and married for five years. I started giving myself two curses a day, like it’s a video game.

I always find it weird when ~godly~ people focus on cursing. It’s like, out of all the f**ked up sh*t humans do, God is going to care about you saying a naughty word? Nah, I don’t buy it.

In this lengthy interview, Kanye also talks about how he’s the greatest human artist of all time, whatever the hell that means.

And now—I am unquestionably, undoubtedly, the greatest human artist of all time. It’s not even a question at this point. It’s just a fact. For the greatest artist in human existence to put a red hat on was God’s practical joke to all liberals. Like, nooo, not Kanye! There will be a time when I will be President of the U.S. and I will remember… any founder that didn’t have the capacity to understand culturally what we’re doing.

Now normally this is where I’d write, “Kanye will NEVER be President, lol wtf?” but we can longer do that after Trump’s presidency. So yeah, maybe Kanye will be President one day. Maybe I’ll be a f**king potato one day. Who knows at this point.

Kanye also talked about his feud with Drake.

God is funny. Drake literally lives four blocks down street from me. That shows God has a sense of humor cause we had a rivalry. You cannot be in service to God and be mad at your brother. I go to Drake’s house, walk over there with no security, ‘Here’s my phone number.’ I’m not trying to ring door bell. He might be busy.

I can’t stand with something on my spirit for more than a day. I can’t sleep on it. I have to express it. Me and Drake had the disagreement and he refused to talk to me for 6 months.

Again, I highly doubt God gives a f**k about Kanye’s feud with Drake. I think it’s more likely that Drake and Kanye both happen to live in one of the most affluent neighborhoods in California because THEY ARE FILTHY RICH!

Sometimes I wonder what would happen to Kanye if everyone ignored him. If no one talked about his interviews, listened to his music, came to his cult gatherings…what would he do? I’m assuming he’d lose his mind.