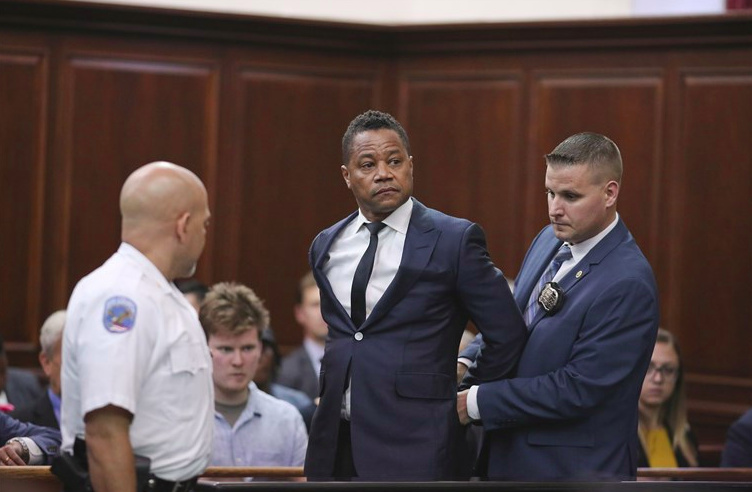 Did He Touch The Butt? Video Shows Cuba Gooding Jr. Walking Behind Server And Possibly Pinching Her Butt (VIDEO)

Back in June of 2019, when the first claim of sexual assault came out against Cuba Gooding Jr. we naively thought it was an isolated incident.

But in the past few months, more allegations have come out against the 51-year-old actor, and one common theme seems to be liquor. He goes to a club, gets drunk, and starts groping women.

As of right now, Cuba is facing six counts of sexual abuse/and or forcible touching. One of his accusers, a TAO nightclub server by the name of Natasha Ashworth claims Cuba pinched her butt as he walked behind her back in October of 2018.

The video from the incident was just released, and you can clearly see Cuba touching the server. You can’t tell if he actually pinched her butt though. You can see them arguing after the touch though.

After the initial contact, you can see she’s agitated and there’s a heated convo. She claims she told Gooding not to touch her butt, and he replied, ‘Aw, that’s no fun, and I didn’t, I touched your back.’

The video shows Cuba attempting to point out where he claims he touched her. However, as prosecutors said in the indictment … you see Natasha grab his arm and motion him away.

Cuba is set to be arraigned in a Manhattan courtroom on Thursday (Oct. 31) on charges from a separate accuser. This dude might as well buy a room in the courthouse.

For what it’s worth, Cuba is pleading not guilty to all six counts and his attorney claims all the allegations are bogus.

Personally, I think Cuba is indeed a creep, especially when he’s drunk. No doubt he’s touched a cheek here, a boob there. But I think that’s where it stops, and I’m sure most of his accusers have faced similar things from less famous people and didn’t report it.

That’s not to say the inappropriate touching should be tolerated. Women shouldn’t have to just accept that sh*t.

But I’m just saying, Cuba probably wouldn’t be in court right now if he was an average joe.