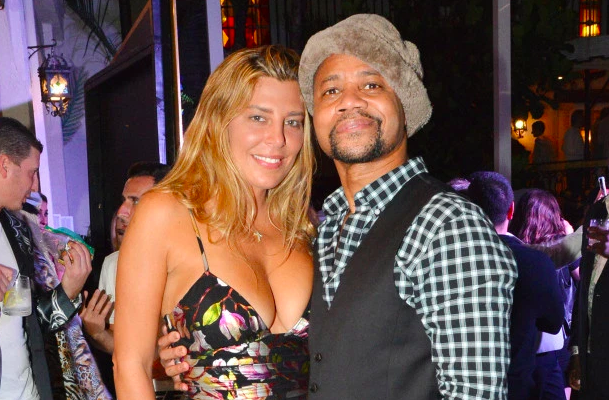 Cuba Gooding Jr.’s Life Is A Complete Mess, Girlfriend Flips Out On Him In Bar, Has To Be Removed By Security (VIDEO)

It’s becoming increasingly clear that Cuba Gooding Jr. needs some sort of rehab. Whether it’s for alcohol, sex or both, he needs it.

As most of you know, he’s been accused of sexual misconduct by several women, and he’s currently battling them in court. Most of the alleged assaults took place in clubs/bars while Cuba had been drinking, so you’d think he would stay away from the nightlife scene for a bit.

Nope. He’s still out here partying. Cuba was in South Beach at Mango’s Tropical Cafe on Saturday to celebrate his girlfriend’s birthday. His girlfriend, Claudine De Niro (was married to Robert De Niro’s son) was previously seen with Cuba back in June in NYC.

During this shindig on Saturday, Cuba and Claudine were having some issues. As you can see in the video, Claudine was talking to Cuba about something serious. Cuba just kinda stood there and listened, which seemed to anger Claudine even more.

Claudine lost her s*** and knocked over at least one shot glass from the bar. Then, she cleared the deck of whatever else was on there. It’s unclear what they were arguing over, but eyewitnesses tell us Claudine was removed from the bar after she got aggressive with security.

The best part about this story? The response from Cuba’s lawyer, Mark Heller.

He told TMZ that Claudine got a “little overly playful” while partying with Cuba.

Looool. Overly playful. Is he trying to say this was some weird foreplay sh*t? Is this the only way Cuba can get off now? The woman has to really act like she wants nothing to do with him? That’s the sh*t that gets him going, huh? It all makes sense now. I bet she spits in his face and talks bad about his mother.