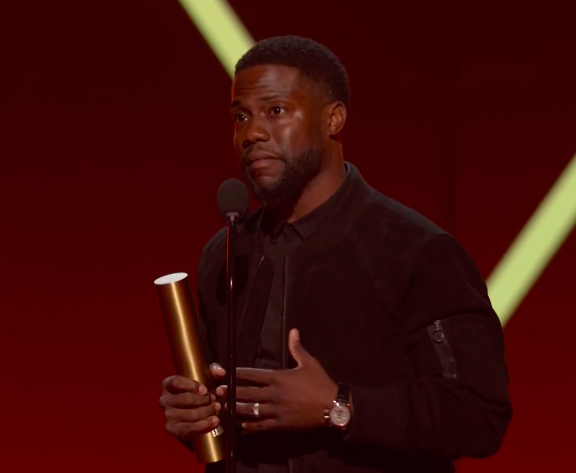 The 2019 People’s Choice Awards went down on Sunday night. We’re not going to really talk about the actual awards, ’cause who the hell cares.

But we will talk about Kevin Hart’s special appearance. The 40-year-old comedian was nominated for two awards. He won the award for Comedy Act of 2019, and much to everyone’s delight, he was able to walk on stage to accept it.

Robert Downey Jr. presented Hart with the award. The audience welcomed him with a standing ovation.

He also took a few seconds to thank the fans for all the positive energy they have been sending him, “You have no idea the effect you have on us as entertainers your energy, your support. I truly want to thank you guys for being there for me in my difficult time.”

The difficult time he’s referring to is of course the car accident he was in back in September. He was letting his friend drive his vintage sports car when his friend lost control, causing the vehicle to veer off the road and into a ditch.

Hart underwent surgery on three spinal fractures and remained hospitalized for 10 days. His rehabilitation, which he documented in a dramatic video posted to his Instagram, is expected to continue for upwards of a year.

It’s nice to see him getting around so well just a little over two months after the accident. You have to believe others wouldn’t be as strong.

But of course others don’t have his money either. It helps when you can afford the best surgeon and physical therapist.