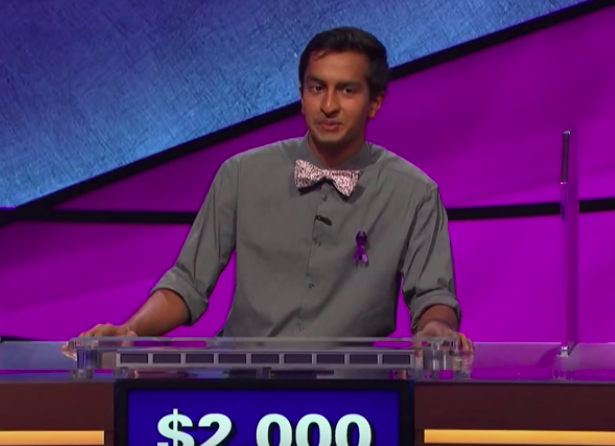 Alex Trebek Gets Emotional During Episode Of ‘Jeopardy!’ After Contestant Writes Special Message

Alex Trebek is still filming episodes of ‘Jeopardy!” although no one knows for how long that will continue. He was diagnosed with stage 4 pancreatic cancer earlier this year. After undergoing a round of chemo, things were looking good for a month or two.

Sadly though, a few months ago the cancer came back, and it’s even stronger this time. Trebek isn’t giving up, but it’s clear he knows his time is running out.

During a recent episode of the long-running game show, a contestant by the name of Dhruv Gaur made Trebek choke up a bit after writing, “We love you, Alex” for his ‘Final Jeopardy’ answer.

Alex read the answer, choked up and thanked the contestant for his kind gesture, pausing a moment to collect himself before moving on with the show.

It’s rare to see Trebek show any emotion during filming. He’s usually as cool, calm and collected as it gets.

But it must be difficult for him to know this could be his final year hosting Jeopardy. A show he’s hosted for over 30 years. Can you believe that? 30 freaking years. Think of all the relationships he’s made.

It will certainly be sad to see him go. Heck, it’s sad just watching this.