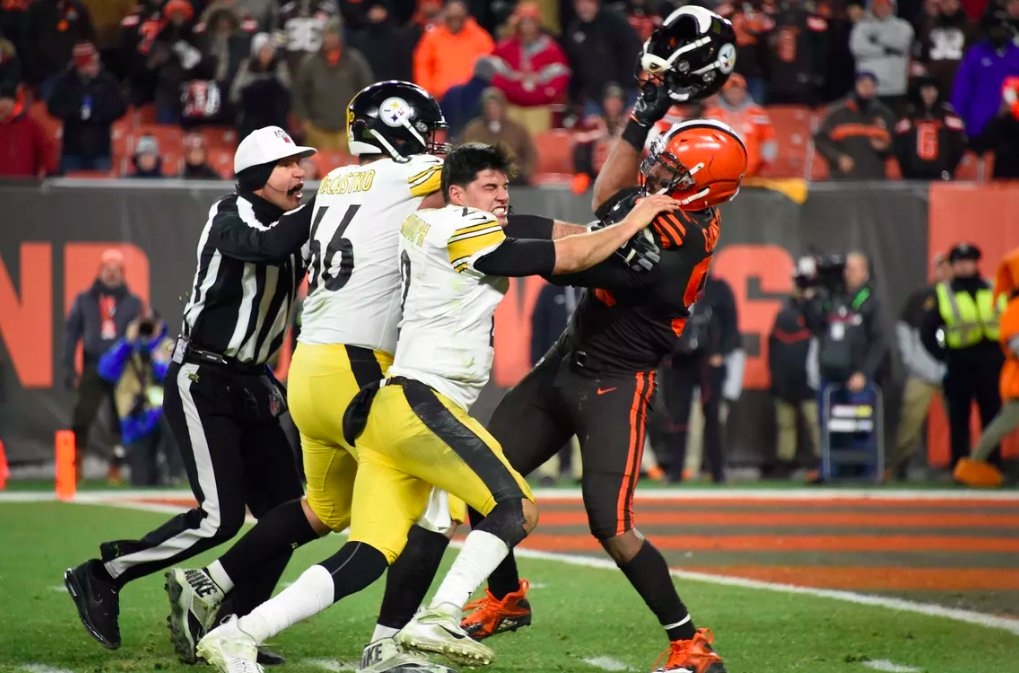 UPDATE FROM THE NFL:

Garrett has been suspended without pay indefinitely — at a minimum for the remainder of the regular season and postseason — and must meet with the Commissioner’s Office prior to a decision on his reinstatement. He was also fined an additional amount.

It got straight up nasty on the field during the Thursday Night game between the Cleveland Browns and Pittsburgh Steelers.

The Browns easily won the game, 21-7, but during the final seconds of the game, a crazy brawl broke out between the two teams after a fight between Browns defensive end Myles Garrett and Steelers quarterback Mason Rudolph.

You can see in the video that Garrett ripped off Rudolph’s helmet and then hit him in the head with it. From there, the Steelers rushed to protect their quarterback and dropped Garrett to the crowd. One dude was even kicking him.

Now obviously people are focusing on Garrett. Some are calling for him to be suspended for the rest of the season. Heck, some even think he should be charged with assault.

It’s still unclear how the NFL will handle the situation, but reaction from the NFL community seems pretty clear…

Bro i can’t even believe that just happen.

That’s assault at the least… 6 months in jail on the street.. now add the weapon and that’s at least a year right?!

He’s done for the rest of the year

That. Is. Insanity. Wow.

Here’s the thing though, if you watch the video again, you’ll see that Rudolph tried to take off Garrett’s helmet first after getting tackled.

Now obviously two wrongs don’t make a right, and Garrett took it to another level by using the helmet as a weapon, but Rudolph can’t play all innocent either.