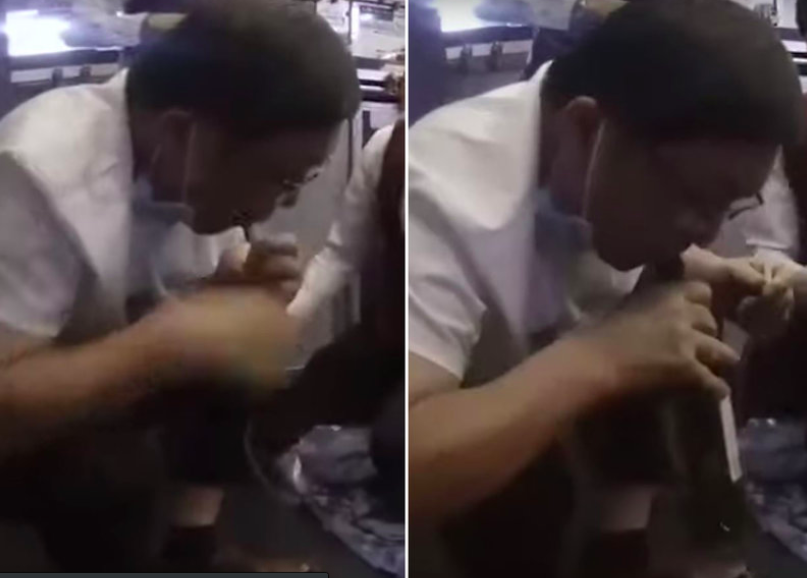 What The Hell: Doctor Saves Man’s Life On A Flight By Sucking Urine Out Of His Bladder, And Yes There Is Video!

You’ve probably been asked by your dopey friend before, “Bro, would you suck the venom out of my penis if a snake bit it?”

But what about urine? Would you suck the urine straight out your friend’s bladder in order to save his life? Apparently, it’s a thing that could happen.

A doctor saved a man’s life aboard a China Southern Airlines flight, which was en route to New York. The crew working the flight made a call for a doctor after an elderly man on board complained of severe pain and a swollen stomach.

Thankfully, there was a doctor on board. A vascular surgeon named Zhang Hong. He was able to determine that the man had nearly a liter of urine trapped inside his bladder. The man couldn’t urinate, and the flight wasn’t scheduled to land for another six hours.

A fatal rupture could occur at any moment, so Hong went into action.

Clearing out the staff area they made a makeshift bed. He then rigged a device together using the materials that were available to him, including a portable oxygen mask, a syringe needle, straws from milk boxes and tape.

He managed to pierce the patient’s bladder, but the syringe was not big enough to ease the pressure, so he had to improvise with the only pump he could rely on: his own lips.

That’s right. He started sucking the man’s urine out of his bladder. And since this man obviously has problems urinating, this was probably some old a** urine. Not that sparkling clean stuff. We’re talking Arrowhead Bottled water sh*t.

He spent a total of 37 minutes sucking urine out this man’s bladder and ended up saving his life. The good doctor told reporters that had they not reacted, the man could have died.

If we had not dealt with the situation in time, the patient’s life would have been at risk. It was an emergency situation. I couldn’t figure out another way. When I saw that the man could hardly bear the pain any more, my only thought was how to get the urine out of his bladder.

Damn. Give this dude free flights for the rest of his life. You know what I find interesting? Doctors are some of the only professionals who have no problem jumping into action off the clock.

Any other profession, that dude would have been out of luck. Like if he had a computer emergency instead, and they put out a call for a technician, you know there’d be someone like, “Pfft, hell no. It’s my day off. You gonna pay me time-and-a-half? Yeah, I didn’t think so. Take it to Geek Squad once you land.”