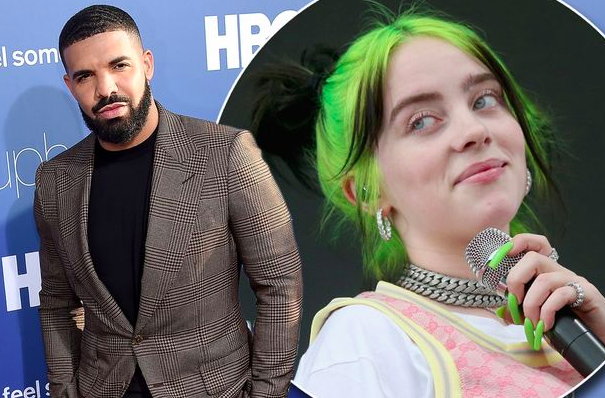 Billie Eilish Reveals Drake Texts Her, And The Internet Claims This Is A Pattern Of Creepy Behavior From Drake

Drake is one of the hottest artists in the world. As we mentioned in a previous post, he was the most-streamed artist of the decade on Spotify with over 20 billion streams. The dude makes hits. That’s what he does.

He’s also known for being really nice. Some might say emotional and a bit sensitive, but hey…we all have our quirks.

But now people are wondering if he’s a little too nice. You may remember hearing the news last year about Drake texting ‘Stranger Things‘ star Millie Bobby Brown.

During an interview last year, the 15-year-old actress had this to say about their friendship…

According to Brown, Drake gives her advice on boys, which is a little strange…but also no different than what a big brother might do for a little sister. It could be that Drake truly wants to look out for her and make sure Hollywood doesn’t break her.

But now people are starting to question Drake’s motives after another young artist revealed she also texts Drake. Billie Eilish told Vanity Fair that she and drake text on the regular.

Drake is like the nicest dude I’ve ever spoken to. I mean, I’ve only like texted him, but he’s so nice. Like, he does not need to be nice, you know what I mean?

Billie is 17-years-old. She will turn 18 later this month though.

So what’s going on here? Why does Drake feel like it’s his responsibility to play big brother? Well, some people are wondering if he’s “grooming” them.

Millie Bobby Brown and now Billie Eilish are two underage girls who say Drake (a whole 32-years-old) texts them. This is troublesome. Something we should maybe sit up/pay attention to. Like…now. As opposed to later when we usually do, lamenting "we should have paid attention"

Drake when Billie Eilish tells Vanity Fair they text all the time: pic.twitter.com/sjdHdR6bCq

can we talk about drake texting billie eilish and millie bobby brown… he’s a whole ass grown man and they’re two underage girls… that’s some creepy shit if you ask me..

why is drake talking to Billie eilish pic.twitter.com/yyj4h5l5kK

I don’t know. It’s hard to say. I don’t know Drake personally, so I can’t say what his intentions are, but it is possible that he’s just being a nice dude. This could be a case of the internet making it creepy just because he’s a guy.

That being said, I would find it a little weird if my 15-year-old daughter was texting some 30-year-old rapper. I’m not sure I’d give the approval on that, even if he was a “nice guy.”