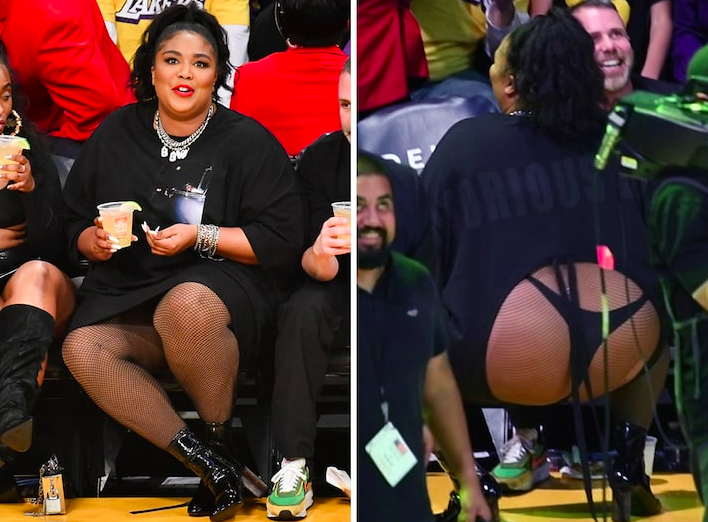 Lizzo Has A Lot Of Fun At Lakers Game, Twerks In A Thong For The Whole Staples Center To See (VIDEO)

No one is enjoying fame more than Lizzo. After flying under the radar for several years, the 31-year-old artist experienced an extremely successful 2019. Her third studio album, Cuz I Love You, peaked inside the top five of the Billboard 200.

Lizzo is now famous enough to sit courtside at a Lakers game, and she did just that on Sunday night. She was there to watch the Minnesota Timberwolves take on the Lakers. As some of you may know, Lizzo began her career in Minnesota, so she’s got some history with the state.

During a break in the game, the Laker Girls went on the court to dance to Lizzo’s ‘Juice‘ track, which got Lizzo all fired up.

She stood up from her seat and started twerking, proudly displaying her fishnet tights and thong.

Well, okay then. I like the one dude in the suit taking a photo at the end, and then shaking his head like, “Can you believe people?” YOU AIN’T FOOLING ANYONE! He wanted to take that photo the entire time.

Lizzo was also interviewed during the game. She expressed her love for Timberwolves star Karl Anthony-Towns.

Lizzo likes some Karl-Anthony Towns. Quite a lot, in fact. pic.twitter.com/bzfaawU4uh

Maybe he was watching during the twerking session. Big girls need love too! GO FOR IT, LIZZO!