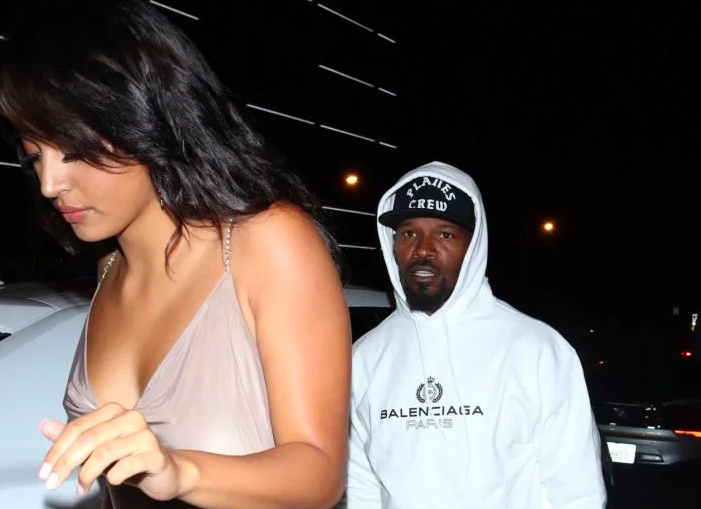 Jamie Foxx turned 52-years-old today (Friday, the 13th) and to celebrate, he went out to the club…as most 52-year-olds do, right? The singer/actor hit up his favorite Hollywood hot spot Thursday and partied the night away.

And guess who was right by his side the entire night? 19-year-old Sela Vave. Back in August, we told you that Foxx was seen hanging out with the aspiring singer/model. They were spotted by photographers hanging out several times.

One report even claimed he moved her into his house. Weeks after the dating rumors hit the internet, Foxx jumped on social media to clear some things up.

There was a young lady by the name of Sela Vave. I did the same thing with her. When I met her, [my friend] introduced me to her. He said, ‘This girl is amazing.’ So, she’s on my steps, singing Beyoncé, broken down, she’s playing the guitar. I said, ‘How the f–k? When did this happen?’ So we took her under our wing.

I’m not no old n–ga out here with no young folks. You understand what I’m saying?

And while he might claim their relationship is strictly professional, it seems a little strange. Sela has been by his side for months now, and she was right by his side Thursday night in the club.

They kept close to one another at the DJ booth alongside DJ Irie, and Foxx couldn’t take his eyes off [Vave] all night.

Sources say they were right by each other the whole night…until Foxx left the club with the mystery woman you see in the photo below.

Now look, I’m not going to pretend to know what’s going on in Foxx’s life, but I get the feeling this mystery woman is a distraction. A trick play, so to speak. He’s trying to make you think the ball is in his SUV, but really, it’s Sela waiting for him back home.

I’M JUST SAYING! TOO MANY DAMN “INSIDERS” have seen Sela and him looking pretty damn cozy. Seems pretty suspicious to me.