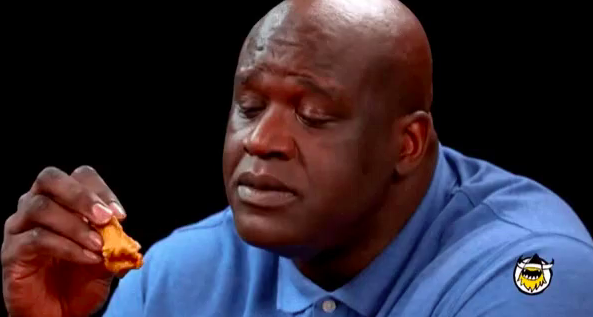 Shaquille O’Neal is a very big man. He stands at a ridiculous 7’1″ and weighs over 300 pounds. The dude is basically a wall.

And you need lots of food to fuel such a huge frame. Shaq talked to Us Weekly recently about his favorite cheat meals.

Also making the cut for the restaurateur, who owns a Big Chicken in Las Vegas and a Krispy Kreme in Atlanta, is Sierra Mist and a ‘thamich,’ which is what he calls a sandwich with turkey, cheese, lettuce and tomato.

Those cheat meals sound rather tame compared to Dwayne Johnson’s, who seems to eat the entire ocean when he chows down on sushi.

Getting back to Shaq though, he might have to cut back on the amount of cheat meals he has. He has big plans before he turns 50 in 2022. He wants to get shredded one last time and post a shirtless photo on Instagram.

I want to be [shredded]. I got 720 days to be perfect. I just want to rip it off one last time for Instagram.

He’s already in the gym being trained by a former bodybuilder, so it looks like he’s taking it seriously.

I feel like this is such a Shaq-like goal. He doesn’t want to simply get in shape for himself. He wants to get shredded so he can flaunt his body on Instagram.

At least he’s honest about it. Other people try to be slick with it. Post some photo of them coming out the pool like a mermaid, “Oops! Didn’t realize my phone was propped up on the pool chair with the timer set!”