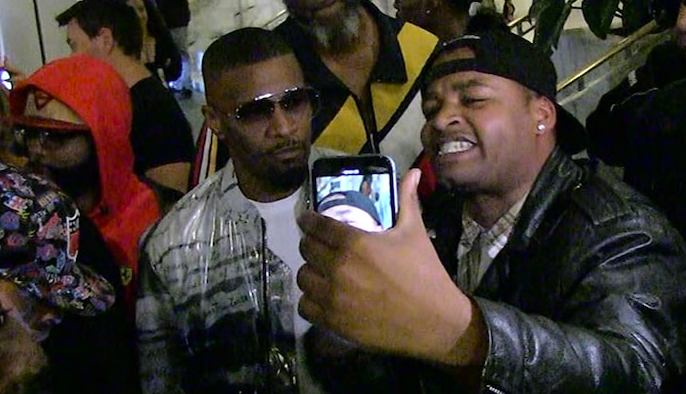 We thought G-Eazy and Megan Thee Stallion’s uncomfortable PDA clip would be the most awkward thing we’d see this week, but then this happened.

Jamie Foxx was in Miami on Sunday night after the Super Bowl, and as he walked through a crowd, a dude stopped him and started passionately rapping next to him.

He was clearly filming himself for his Instagram Live or some sh*t. Foxx knew he’d look like an a**hole if he just left in the middle of the rap, so he was forced to just stand there and take it.

I mean, how could he leave when this dude was rapping about his grandma dying?

This dude feels like a zany character from Atlanta or something. And when he started giving shoutouts to Kobe? Oh lawd.

Foxx was nice enough to softly clap for him, but you could tell he was wanting to get the hell away from the dude.

The more I watch this, the more impressed I am with Foxx. It shows he has a lot of compassion. He could have easily brushed this dude off, but he didn’t want to hurt his feelings. That’s pretty damn cool.

That being said, someone needs to be real with that dude. Rapping ain’t his thing.

Where is Simon Cowell when you need him?