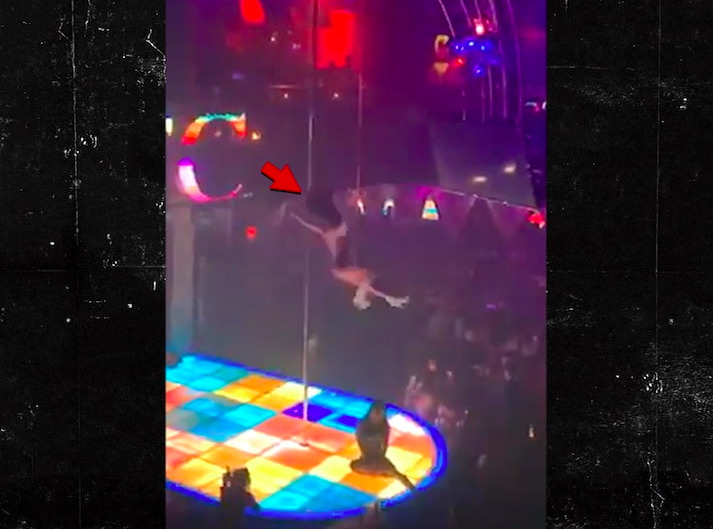 INSANE VIDEO: Stripper In Texas Falls Off Two-Story, 15-ft Pole, And Somehow Twerks Out The Pain

When you send a risky text and you get a reply 😭😭😭😭 pic.twitter.com/YEbto3cZeu

In what might be the craziest video of the year, a stripper named Genea Sky essentially fell from the sky during a performance inside a club in Texas.

Sky was working a 15-foot tall pole during her routine when she slipped and fell all the way to the floor.

The video is disturbing to watch. I showed it to a few people around me and they all had a, “OH MY GOD!” reaction.

I had to replay it for them because they checked out before Sky started twerking her pain away. How the f**k did she keep twerking? That’s insane.

For those wondering, she did NOT escape without injury. She fractured her jaw, cracked a few teeth, sprained her ankle and had to get a few stitches under her chin. She went on her Instagram account to update her followers.

This isn’t for attention. This video is to update everyone and thank you guys for all the love and support. I’m truly blessed and I appreciate everyone’s kind messages. Thank you so much 🙏🏽💜

She has over 100,000 followers on Instagram, by the way. Not sure how many she had before the viral fall, but we’re sure it’s grown significantly.

As she mentioned in her post, she has to have surgery on her jaw, which will likely be pretty damn expensive. Her friend set up a GoFundMe account for her. It already has over $20,000 raised, so hopefully that’ll cover the majority of the medical stuff.

It’s easy to make jokes about this, but damn…she was really emotional in that video. She could have easily died or been paralyzed. A number of things. She’s extremely lucky.

Also shoutout to the recorder of the video who said quietly, “Is she okay?” once she started twerking again. LOL. Favorite part of the video.