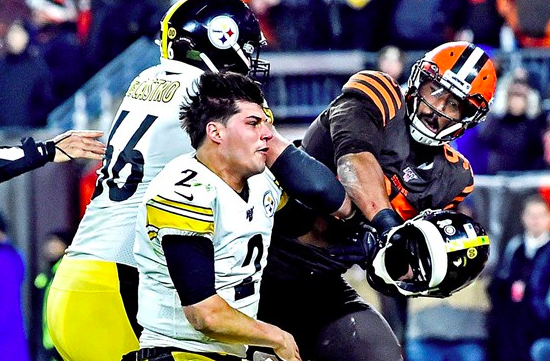 Remember the insane brawl between the Steelers and Browns back in November of last year? You should. The brawl dominated the headlines for weeks, mainly because Cleveland Browns star Myles Garrett used a helmet as a weapon, which is a big no-no.

But just this past week, he had a successful meeting with NFL commissioner Roger Goodell and was reinstated. If you remember, Garrett claimed that Rudolph had used a racial slur, which is what sparked the brawl. He never did reveal what he allegedly said though.

Myles Garrett sat down with @minakimes to discuss the Week 11 incident that led to his suspension.

He again alleged Mason Rudolph of using a racial slur prior to the brawl. pic.twitter.com/8FUKDbKIg4

In a new interview with ESPN, Garrett finally gave us all the details. He claims Rudolph called him the n-word.

He called me the n-word. He called me a stupid n-word. When he said it. It kinda sparked something. I don’t say the n-word, whether it’s ‘a’ or ‘er.’ To me, personally, I don’t think it should be said.

Now if this is true, it’s pretty huge. I think it’s totally okay to slap someone with a helmet if they use that word.

But there are two sides to every story, and Rudolph has maintained he never said the n-word. The NFL reportedly investigated the claim but could not find anyone to back up Garrett’s accusation. It’s also worth noting that in Garrett’s original apology right after the incident, he made no mention of a racial slur being used.

It wasn’t until his appeal hearing later in November that he brought up the racial slur.

Who knows what really happened. I don’t think we’ll ever know for sure. It’s not like Garrett or Rudolph have any reason to tell the truth.

Who do you believe?