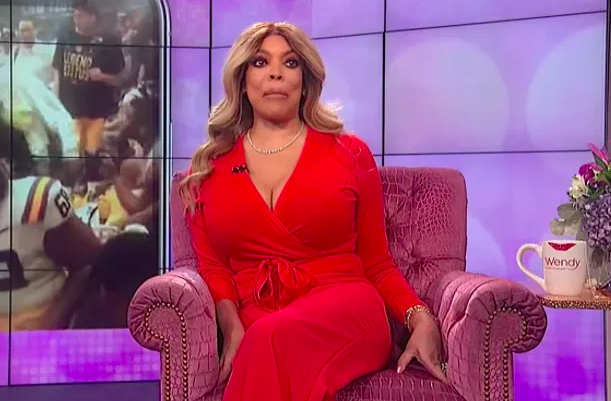 In case you missed it. #WendyWilliams clearly making fun of the death of Drew Carey’s ex #AmieHarwick. She was killed by her ex bf by being thrown from a third floor balcony. #DisgustingBehavior pic.twitter.com/CpGafXrOg0

It looks like Wendy Williams is addicted to making the headlines, ’cause she is continuing her trend of making controversial comments to get attention.

After pissing off the entire gay community a week ago, and then issuing a tearful apology, Wendy has recovered and is now making fun of dead people.

During her show on Monday, Wendy talked about the shocking death of Drew Carey’s ex-fiancee, Dr. Amie Harwick. As we reported, she was murdered by her abusive ex-boyfriend. He reportedly pushed her off a balcony during a fight.

Carey took the news pretty hard. They even canceled filming on Price is Right to give him some time to properly grieve.

So Wendy was telling her audience about the murder, and it was already gross enough by the insincere shots of the “shocked” audience, but then it got even weirder.

Williams was talking about how Harwick was pushed off the balcony, and then she clarified that Carey was not the murderer, “She was killed. Not by Drew…’Come On Down’,” she joked, referencing Harwick’s fall to her death and the famous Price Is Right line.

The audience did not respond well to the joke. They kinda groaned and things were awkward for a few seconds. Williams managed to turn it around by asking her producer a question and then moving forward.

Many people online are not ready to move forward though.

So in 1 month, @WendyWilliams made a homophobic joke, a joke about Joaquin Phoenix’s “cleft lip”, and now made a Price is Right joke about Drew Carey’s murdered ex fiancée? When is she FINALLY going to be canceled?

I KNOW #WendyWilliams did NOT just make a "come on down" joke about Drew Carey's ex-fiancee getting killed by being thrown off of a third floor balcony !!!!
Somebody tell me i heard that wrong, please..but the audience is stone-cold quiet..

WOW @WendyWilliams DOING THAT “COME ON DOWN” WHILE TALKING ABOUT DREW CAREY’S EX GETTING THROWN OFF A BALCONY IS HORRIBLE!! VERY DISGRACEFUL SHE SHOULD BE THROWN OFF THE AIR. YOURE A HORRIBLE PERSON WENDY. VERY POOR TASTE.

Now I don’t know about canceling her show, but Wendy’s act is a tired one, at least to me. She is constantly punching down, which is what bad comedians do. She’s going after people who are vulnerable, or in this case…dead.

~Edgy~ comedy is fine by me. It’s okay to be offended sometimes. But Wendy is not displaying edgy comedy.

She’s not brave for making this joke. She’s stupid. She’s that one kid in class who just never learned to grow up.

Wendy needs to start punching up before the internet punches her (and her show) into the ground.