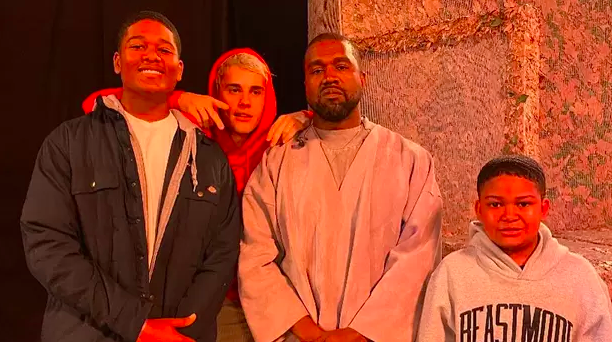 Yes. Kanye West’s Sunday Service choir is still going strong. It continues to grow and grow. West has big plans to take his choir act on the road (and even across seas) this year.

But before the tour starts, West invited Justin Bieber to the service this past weekend. Bieber stood by the piano and belted out Marvin Sapp’s track ‘Never Would Have Made It‘

The crowd was extremely supportive. Praising/cheering every single time he hit a difficult note. You can tell the Biebs was feeling the spirit.

After he finished the song, he walked off the stage and gave West a hug.

His performance was preceded by the Choir singing a revamped and decidedly cleaner version of Roddy Ricch’s ‘The Box’ and ‘Ballin,’ in addition to ‘Love Come Down,’ ‘Jesus Is King’ and other songs that had the audience on their feet, including North who danced and sang along with the choir.

It’s bringing joy to people. Who knows if he’ll grow this into a money-making machine, but for right now, it’s pure and filled with goodness. Ain’t nothing wrong with that.

But let’s be mindful. West is the type of person who would unintentionally start a cult, believe he’s God, and then have everyone participate in some mass suicide.