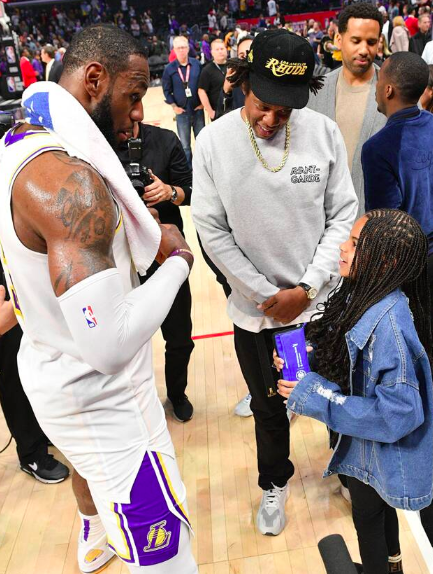 LeBron, Jay-Z and Blue Ivy after the Lakers’ win 🤝 pic.twitter.com/g58Bw9xJ7U

Blue Ivy Carter is the daughter of Jay-Z and Beyonce, which means she’s met some pretty big names in the entertainment industry.

But that doesn’t mean she’s immune to getting starstruck. On Sunday, Jay-Z took his firstborn to the Lakers game at the Staples Center. It was a special daddy-daughter date that ended with the Lakers beating the Clippers 112 to 103.

After the big win, Jay took his daughter to meet LeBron James on the court. She was incredibly shy during the interaction, even asking her father to speak for her.

“I can’t do it. If you want it, you gotta tell him,” he told her. Eventually, she managed to get out that she wanted an autographed basketball.

“You want a ball from me?” James asked, acting as if he was shocked, “Okay, I got you. By the time you get out of school on Monday, you’ll have it,” he told her.

By the way, this video really shows you how massive LeBron is. He makes Jay-Z look like a little dude, but Jay is 6’2″ and around 200 lbs.

James is a super human.