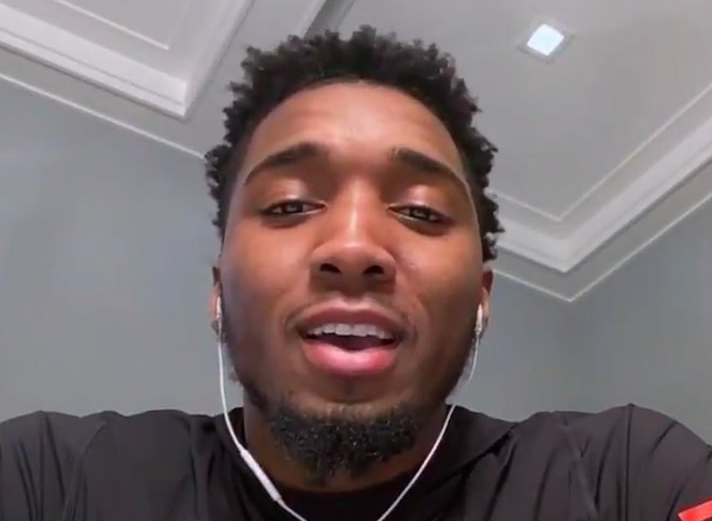 NBA’S Donovan Mitchell Speaks From Isolation, Says He Is Feeling Fine After Testing Positive For Coronavirus

Donovan Mitchell says he doesn’t have any clear coronavirus symptoms and feels like he could play in a 7-game series tomorrow:

“If it wasn’t public knowledge that I was sick, you wouldn’t know it. And that’s the scariest part of this virus.”

Last week, Utah Jazz star Rudy Gobert shut the NBA down after testing positive for the coronavirus. It was a crazy situation. NBA officials made the difficult decision to cancel the game just minutes before it was scheduled to begin.

Ever since then, the world has basically shutdown. All major sporting events have been canceled, no concerts, no movies, and in some cities, no bars, restaurants, retail stores, etc. The world has changed so much since last Monday.

As some of you may remember, Rudy caught a lot of heat for how he acted. When he was experiencing mild symptoms (before he tested positive) he was joking about the illness. He touched a bunch of microphones, and was even careless in the locker room, touching his teammate’s personal belongings.

Once it was revealed he tested positive, his teammates were understandably pissed. He put everyone in danger, and everyone on the team had to get tested. Thankfully, only one other player tested positive, Donovan Mitchell.

Mitchell has been in isolation since being a confirmed case, but the good (and also scary news) is he’s experiencing no symptoms. No cough, no fever, no aches…no nothing. In fact, the worst part of this process has been the test itself, which involves sticking swabs down your throat and up your nose.

He admits the test caused some tears. He talked to Good Morning America and said, “If it wasn’t public knowledge that I was sick, you wouldn’t know it. And that’s the scariest part of this virus.”

And that’s what young people don’t seem to get. You might feel fine, but that doesn’t mean you’re not carrying the virus. This is why it’s important that all people stay home (if they can) for at least another week or two.

Mitchell also admitted he was mad at Gobert for his carelessness. He says it took a while to “cool off” but he’s ready to move on now after Gobert’s apology.