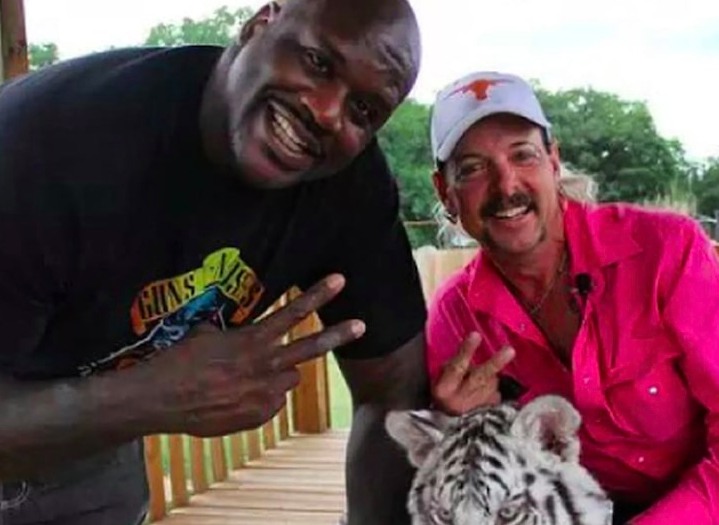 Shaq Claims He Was Not Friends With Joe Exotic, Says He Didn’t Know All The Drama Going On

If you haven’t watched the ‘Tiger King‘ documentary on Netflix, then what the hell are you doing with your life? Seriously. We are in a quarantine! You need quality entertainment right now, and Tiger King is quality.

The documentary follows a man by the name of Joe Exotic (aka the Tiger King) who ran a pretty popular zoo in Oklahoma. Of course, that’s not even scratching the surface of this insane story.

In the documentary, Shaq makes a surprise appearance.

One of the big moments in the series was when Shaq not only visited the GW Zoo back in the day — but he then gave Joe Exotic a plug on ‘Inside the NBA.’ Shaq says he’s visited the zoo several times and even appeared on Joe’s reality show in 2014.

Of course, being associated with Joe and his zoo is not exactly a great thing right now, considering the allegations of animal abuse and, uh, that other thing. We won’t spoil it for you, but it’s f**king crazy.

People have been sending some hate Shaq’s way for supporting the zoo and even sending in donations. The big man decided to address the situation on his podcast.

I was just a visitor. I met this guy. Not my friend. Don’t know him. Never had any business dealings with him, and I had no idea any of that stuff was going on. People that know me know that I’m righteous. I don’t harm tigers. I lover tigers.”

We found out that he’s involved with all the stuff, and then, actually, I stopped going.

And while we believe he stopped going once he found out, it was probably more of an “image” issue for Shaq. I mean, look, we’re not saying Shaq is a bad guy, but we do wonder if he actually knows what qualifies as animal abuse.

For example, there is a bizarre story about how Shaq spent his first paycheck. He allegedly dropped one million in a single day, and his big purchase was a SL 500 from the local Mercedes dealership.

And according to the story, he had his team mount a fish tank inside, and then placed speakers and subwoofers inside. That’s right, he had fish tank speakers inside his car.

Evidently, Shaq hadn’t realized that sound waves can harm fish and one of his bodyguards was tasked with replacing the fish daily.

So yeah, if this story is 100% accurate, Shaq was killing fish daily, just so he could have fish tank speakers.

I’m not trying to compare that to Joe Exotic, but I’m just saying, I doubt Shaq would even recognize the signs of animal abuse.