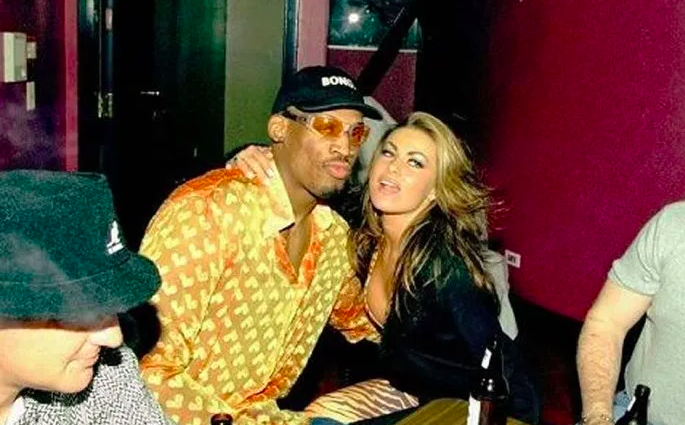 ESPN is currently airing a docuseries titled ‘The Last Dance‘ about the 1997-98 Chicago Bulls, and it’s been stirring up a lot of feelings.

As most of you probably know, Carmen Electra and Dennis Rodman were married for a few months back in 1998. They got married in November of 1998 after a heavy night of drinking in Vegas, only to divorce a handful of months later in April of the following year.

But for a short time, they were connected on some deep level. During an interview with The Los Angeles Times, Electra said Rodman was a freak in the sheets.

They couldn’t keep their hands off each other, which led to them having sex all over the Chicago Bulls’ Practice Facility…

He blindfolds me and we get on his motorcycle. When he finally takes my blindfold off, we’re standing at the Bulls practice facility, center court. It was crazy, like two kids in a candy store.

We were eating Popsicles from the fridge and pretty much having sex all over the damn place — in the physical therapy room, in the weight room. Obviously on the court. To be honest, I don’t think he’s ever worked out so hard in his life.

I mean, good for them, but let’s hope they cleaned that facility on the regular…cause, ew? I guess his “Rod-man” last name is appropriate.

Carmen also admitted she has zero regrets about her wild times with Rodman. She said he had a real soft heart, even though he was a “savage” on the court.

They don’t talk much anymore, but their mutual agent did try to work out something recently…

He sent some videos to me wanting to have lunch. Typical Dennis. So [our agent] put us on the phone for a few minutes and Dennis said hi. It was sweet.