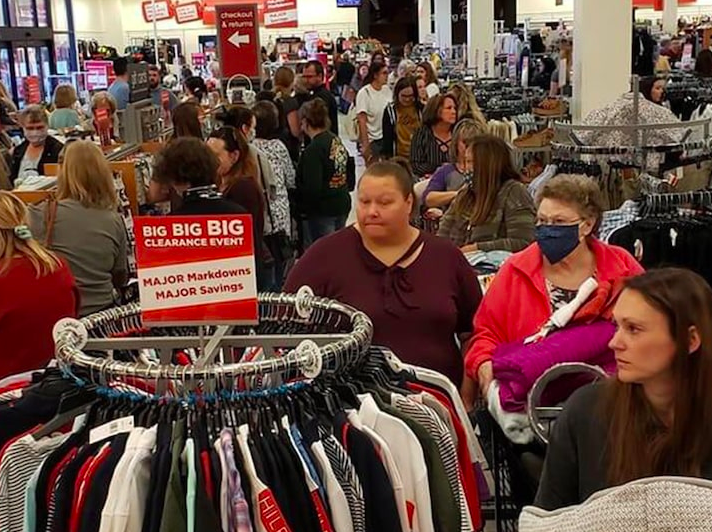 As States Reopen, People Rush To Eat/Shop, And It’s Not A Good Look At All (PHOTO)

Multiple states across the country are starting to reopen after being on a lockdown for over a month, due to the novel coronavirus. States like Georgia, Texas, Arkansas and Colorado have opened back up to at least 25% capacity.

But if you have a brain, you were probably wondering how this “25% capacity” thing was going to work. Do we really expect businesses to police this? The answer is no, and we saw evidence of this over Mother’s Day weekend.

Happy Mother’s Day from C& C in Castle Rock, where the owner said this is almost double a normal Mother’s Day. pic.twitter.com/cPSzjmAfAg

This clip went viral on Twitter on Sunday. It’s from a local cafe in Castle Rock, Colorado. People say instead of “25% capacity” the restaurant was actually at 200% capacity. They were doing double the amount of business.

And they weren’t the only ones. The photo you see below is allegedly from a TJ Maxx store in Arkansas. As you can see, the place is packed.

There are people all over the damn place. It looks like Black Friday in there!

Yeah. It’s a “big big BIG” clearance event because the damn world is going to end. They gotta get rid of everything.

It’s craziness, and it’s going to result in more death. As TMZ reports, the models are starting to show an increase in deaths…

That’s not a good thing either — considering a key model used by health experts forecasts at least 137,000 more deaths in the coming months because of increased mobility across the U.S.

The director of the University of Washington’s Institute for Health Metrics and Evaluation told CBS’s ‘Face the Nation’ his findings show a lot more people leaving their homes … this in the wake of several states starting to relax quarantine protocols.

This is why the 25% bullsh*t doesn’t work. You can’t expect businesses to enforce these rules. It’s not going to happen. And you also can’t expect the average human to follow the rules. Most people are stupid. I know that’s not “right” to say, but it’s true.

People have been in “lockdown” for just a little over a month, and they act as if it’s been a year. And it wasn’t even a full lockdown. They could still go to the grocery store, out for a walk, etc. It wasn’t as if they couldn’t leave the damn house.

CAN’T WE JUST STAY INSIDE A LITTLE LONGER? DO YOU REALLY NEED A $10 PAIR OF JEANS FROM TJ MAXX?