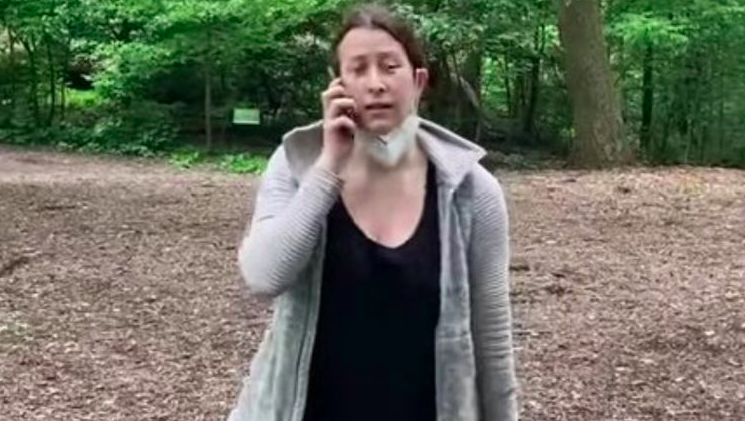 Watch this white woman is on this Black man to 911. The weaponizing of White fragility, as well as 911 itself, is not a game. It can lead to Black death. Sometimes “Karen” is indifferent to this truth. At other times, like this, it appears quite intentional. This is terrifying. pic.twitter.com/BDHlWpnyiO

In the past 24 hours, the name “Amy Cooper” has become a household name in America. If you don’t know her by her actual name, perhaps you know her by her nickname, Central Park Karen.

On Sunday, a woman by the name of Melody Cooper (no relation) posted a video on Twitter that was sent to her by her brother, Christian. In the video, you can see Amy yelling hysterically at Christian and threatening to call the cops on him all while dragging her poor dog by the neck.

In the video, Amy approaches Christian (who approaches someone if they feel threatened?) and tells him to stop recording her. She then threatens to call the police, saying, “I’m going to tell them there’s an African American man threatening my life.”

Yes. She really said that. In fact, she said it twice. Once to Christian, and once to the 911 dispatcher she called. She yelled through the phone that there was an African American man threatening her and her dog at the park. And the way she sounded, I’m sure the person on the other line believed her.

But let’s rewind just a bit. This whole thing started because Christian (an avid bird watcher) asked Amy to put her dog on a leash. It’s illegal for a dog to be off its leash in that area of the park.

That’s important to us birders because we know that dogs won’t be off leash at all and we can go there to see the ground-dwelling birds. People spend a lot of money and time planting in those areas as well. Nothing grows in a dog run for a reason.

He apparently has a routine for when this happens. He explained that he keeps treats inside his pocket while at the park.

He told CNN he keeps dog treats with him to get dog owners to put their dogs on leashes because, in his experience, dog owners hate when a stranger feeds their dog treats and immediately restrain their dogs afterward.

That’s why Amy was so upset. She thought Christian was going poison her dog or something. But apparently she wasn’t afraid enough to put the dog on a leash.

In any event, Amy (who works at an investment company) was forced to apologize. She talked to CNN and claimed she was scared for her life.

I’m not a racist. I did not mean to harm that man in any way. [My] entire life is being destroyed right now. I think I was just scared. When you’re alone in the Ramble, you don’t know what’s happening. It’s not excusable, it’s not defensible.

Her employer has placed her on administrative leave as they investigate the incident. Additionally, her dog has been surrendered to the shelter he was adopted from while the “dispute is being addressed.”

I’m not going to get too into the details here, but the bottom line is that Amy attempted to weaponize her white privilege. She threatened Christian that she was going to tell police he was an “African American” man, meaning she knows how cops treat them.

That’s dangerous, and in my opinion, unforgivable.