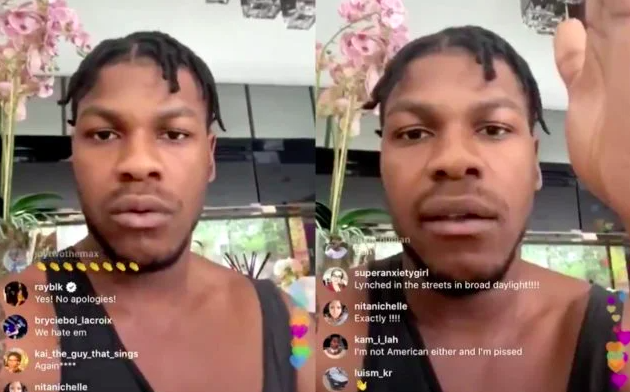 “I hate racists—with a passion.” I love seeing @JohnBoyega not only speak truth to power, but do so in such uncompromising language. Way to use your platform, brother. pic.twitter.com/ug5bhfbYlm

If you know anything about ‘Star Wars‘ actor John Boyega, then you know he truly does not care what anyone thinks. This dude has actively trolled Star Wars fans online, which is perhaps the most dangerous thing you can do, and he stars in the damn films!

So yeah, Boyega truly gives no f**ks and he’s not afraid to speak his mind, which is why his Instagram Live “rant” is not exactly surprirsing.

Like most people, Boyega is disgusted by the recent police killings and just general racism spreading across America. He’s done with it.

He went on Instagram Live to talk directly to the racists…

I hate racists with a passion. F**k you racist white people. It’s very, very important at this time that we ignore ignorance and we ignore people that come through and try to make these situations what they’re not. It’s not about career, it’s not about money.

All those things were just a part of my dream, just a part of working. That’s got nothing to do with how you treat people. You lot can’t rattle me. I’m not the guy to be rattled. I wasn’t raised by no weak people.

Obviously Boyega is not the only celebrity talking about the murder of George Floyd. Several celebrities have posted about the murder, including Cardi B, Justin Bieber, Kim Kardashian, Beyonce, Ciara, and many more.

But no one has been as passionate and real as Boyega. For that reason alone, he has my respect. You can tell he didn’t run that Instagram Live video by his publicist.