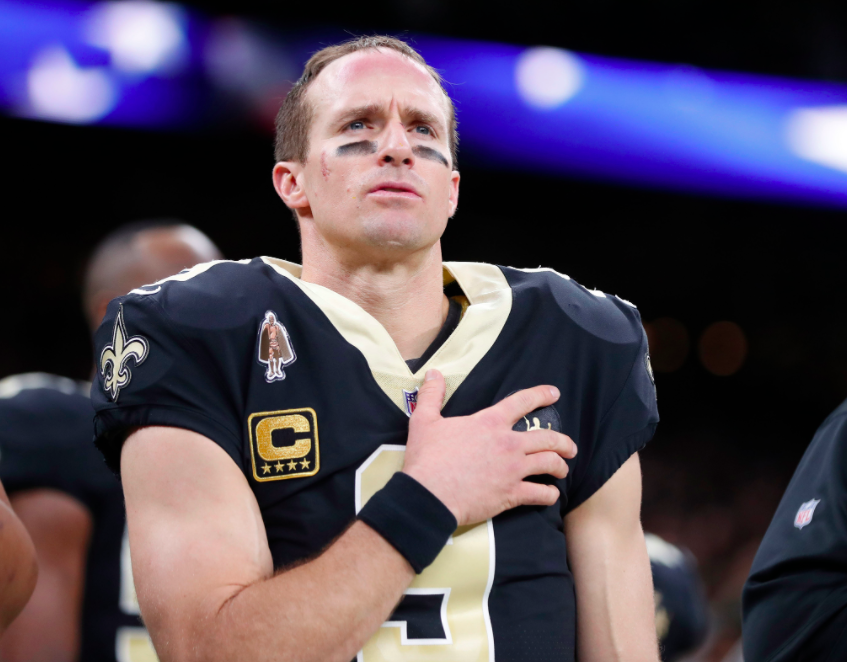 Damn. Drew Brees goofed big time this week. The New Orleans Saints quarterback had an interview with Yahoo Finance earlier this week, and during the interview, he talked about the current events.

And at first, his response was okay. Not great, but okay.

I think my response via social media today was basically to reinforce my belief that God created us all equal and I think that we all have a responsibility to love each other and to respect each other. I think that we accomplish greater things as a community, as a society and as country when we do it together.

But when he was asked about Colin Kaepernick’s ‘Take A Knee’ National Anthem protest against police brutality, Brees got all emotional over the f**king flag.

I envision my two grandfathers, who fought for this country during World War II—one in the Army and one in the Marine Corps—both risking their lives to protect our country and to try to make our country and this world a better place.

So every time I stand with my hand over my heart, looking at that flag and singing the National Anthem, that’s what I think about. And in many cases, in brings me to tears thinking about all that has been sacrificed—not just those in the military—but… those throughout the Civil Rights Movements of the ’60s and all that has been endured by so many people up until this point.

So yeah, obviously he’s missing the point. No one is disrespecting his grandfathers. He added that he believes people should show “respect” to the flag, which just might be the stupidest thing ever. Show respect to a flag? TO A F**KING FLAG?

At some point, Drew needs to ask himself why he cares more about a piece of fabric with some stripes on it than actual human beings.

Obviously people had a problem with his statement. LeBron James didn’t hold back…

WOW MAN!! 🤦🏾‍♂️. Is it still surprising at this point. Sure isn’t! You literally still don’t understand why Kap was kneeling on one knee?? Has absolute nothing to do with the disrespect of 🇺🇸 and our soldiers(men and women) who keep our land free. My father-in-law was one of those https://t.co/pvUWPmh4s8

After the backlash, Drew was pretty much forced to apologize. He released a lengthy statement early Thursday morning.

I would like to apologize to my friends, teammates, the City of New Orleans, the black community, NFL community and anyone I hurt with my comments yesterday. In speaking with some of you, it breaks my heart to know the pain I have caused.

In an attempt to talk about respect, unity, and solidarity centered around the American flag and the national anthem, I made comments that were insensitive and completely missed the mark on the issues we are facing right now as a country. They lacked awareness and any type of compassion or empathy. Instead, those words have become divisive and hurtful and have misled people into believing that somehow I am an enemy. This could not be further from the truth, and is not an accurate reflection of my heart or my character.

You can read his full statement by clicking here. I don’t know about you, but all these apologies and statements…they’re starting to come off as emotionless and boilerplate?

It’s like when your mom made you apologize to your sibling after a fight. Did you actually mean it? Or did you just want to play the N64 again?