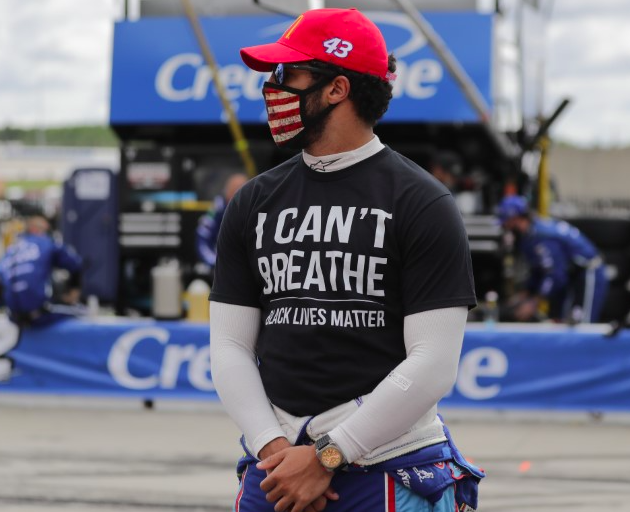 "My next step would be to get rid of all Confederate flags,” says NASCAR driver Bubba Wallace after throwing his support behind the nationwide protests against police brutality. “Get them out of here." https://t.co/Kf4CrMLLGh pic.twitter.com/wSSBhByguS

Believe it or not, NASCAR does have a black driver. Bubba Wallace is the league’s only black driver at its highest level, and he’s calling on league officials to make some changes.

And for some time, Wallace was okay with this, but now that he’s more educated on the subject, he wants NASCAR to ban the flags.

Diving more into it and educating myself, people feel uncomfortable with that. People talk about that. That’s the first thing they bring up. So there’s going to be a lot of angry people that carry those flags proudly, but it’s time for change. We have to change that. And I encourage NASCAR — and we will have those conversations — to remove those flags.

In the past, NASCAR has tried to cut down on the amount of confederate flags, even issuing a “trade-in program” agreeing to swap them out with American flags.

It’s likely an official ban will come down soon. There’s just no way around it. And yeah, there will be rednecks who have a problem with it.

But to those rednecks, maybe you should listen to what one of the more famous rednecks ever has to say about the subject now.

That’s nice and all but if I recall, it don’t matter what it means to you because to African Americans everywhere it’s a symbol of oppression hatred and inequality so your little ‘heritage not hate’ story don’t mean sh*t because your stupid little ‘heritage’ was built on the backs of slaves and identifying with that kinda sorta definitely makes you trash in the Texas Rattlesnake’s eyes. So you can continue to spew your bullish*t but just know that none of us care ya dumb sumbitch and that’s the bottom line.

Well…that’s the bottom line, I guess.