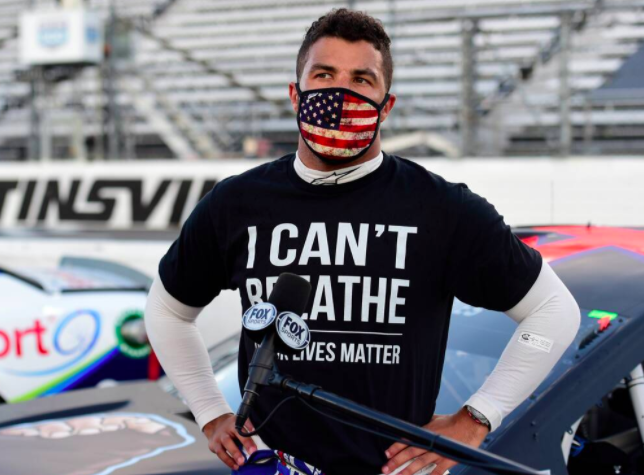 Earlier this week we told you about the noose that was found inside Bubba Wallace’s garage stall at Talladega Speedway. This was obviously cause for concern, considering Wallace is NASCAR’s only black driver at a professional level.

And this noose finding came just days after it was announced that NASCAR had banned confederate flags from racing venues. So people thought someone was targeting Wallace.

The entire NASCAR community rallied around Wallace on Monday at Talladega. Most of the other drivers walked behind his vehicle and pushed it down the track as the national anthem played. It was a moving scene that brought Wallace to tears.

Now two days later, the FBI has completed its investigation into the matter and they have determined no hate crime was committed. The FBI had photographic evidence that “the garage door pull rope fashioned like a noose had been positioned there since as early as last fall.”

This mean that Wallace could not have been targeted specifically, considering no one could have possibly known which garage stall he would be in several months in the future.

We appreciate the FBI’s quick and thorough investigation and are thankful to learn that this was not an intentional, racist act against Bubba. We remain steadfast in our commitment to providing a welcoming and inclusive environment for all who love racing.

What does Wallace have to say about the finding? Well, he’s rightfully worried that people will think he was part of some hoax.

The backlash will always be there. It doesn’t matter if we provide 100 percent facts and evidence, photo evidence. People are going to photoshop it to make me look like the bad person at the end of the day. I will always have haters. I will always have the motivators to go out there and to try to dethrone me from the pedestal that I am on.

None of the allegations of [it] being a hoax will break me or tear me down.

Obviously people’s minds are jumping to the ridiculous Jussie Smollett situation back in January of 2019. You’ll remember he claimed he was jumped by two dudes and beaten to ground. He also claimed the attackers poured bleach on him and put a rope around his neck.

At the time people were outraged, but then his story quickly fell apart and it was determined that he staged the entire thing. I think he still denies that fact to this day, but who really gives a f**k. Dude is a fame whore.

That being said, I don’t think this situation is comparable, at least not yet with the information we know. This doesn’t appear to be staged, especially not by Wallace. It’s looking like an unfortunate coincidence. If any other driver got that stall, this would be different. And heck, if racial tensions hadn’t already been high, Wallace’s team may not have given the rope a second look.

But given the current atmosphere, they were on high alert, and this was the result.