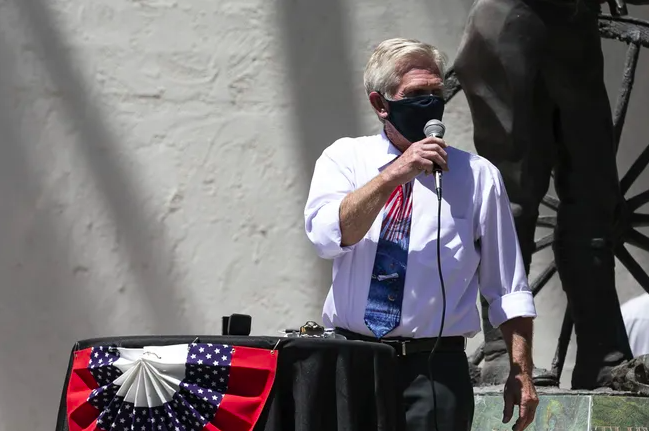 Arizona is seeing COVID-19 cases increase substantially, mostly because the state is run by a bunch of idiots who allowed everything to reopen too soon. The same thing is happening in Texas.

Not only are people in Arizona going to restaurants, bars, hair salons, but the majority of them are doing all this without a mask. They are vehemently against wearing masks for a number of equally ridiculous reasons, but one of the main reasons being that they claim they can’t breathe while wearing them.

A Scottsdale City Council member named Guy Phillips addressed a crowd of anti-mask protestors Wednesday by wearing a mask and then saying, “I can’t breathe! I can’t breathe!” before taking the mask off and being rewarded with a loud cheer from the crowd.

This was obviously intentional. George Floyd repeated those three words as Minneapolis cops slowly murdered him by kneeling on his neck.

Multiple people called out Phillips for his display of stupidity and disrespect, including Arizona Governor Doug Ducey, who wrote this on Twitter…

Of course, Phillips is apologizing, now that his career is being threatened.

It was a stupid and insensitive comment that I shouldn’t have made, and I had no intention of disrespecting anybody. [Floyd] didn’t deserve what happened to him, and I by no means was trying to make light of it by saying I can’t breathe in a mask. Please accept my sincerest apology and that goes out to anyone who became offended.

What a crappy apology. His apology goes out to “anyone who became offended” and he claims he wasn’t trying to make light of it? OF COURSE YOU WERE!

Dude is a loser, and hopefully his political career never goes beyond disgraced city councilman.