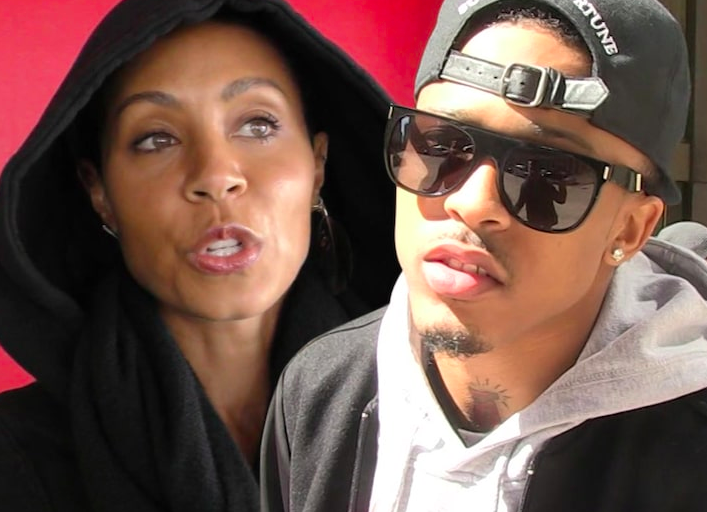 What In The Hollyweird? August Alsina Claims Will Smith Gave Him Permission To Sex Up Jada Pinkett Smith!

You’ve all heard the rumors about Will Smith and Jada Pinkett Smith’s marriage. Sources have claimed throughout the years that they’ve had an open marriage. They claim they’re not actively seeking out other partners, but if it happens, it’s all good.

And a 27-year-old singer named August Alsina claims he experienced this open marriage firsthand. During an interview with “The Breakfast Club’s” Angela Yee, Alsina claims Will gave him permission to f**k his wife.

I actually sat down with Will and had a conversation due to the transformation from their marriage to life partnership … he gave me his blessing.

According to Alsina’s story, he was first introduced to Jada back in 2015 when he would have been just 22-years-old. Apparently, Jaden is the one who introduced them, although I doubt he knew it would become a love connection.

I totally gave myself to that relationship for years of my life, and I truly and really, really deeply love and have a ton of love for her. I devoted myself to it, I gave my full self to it — so much so to the point that I can die right now and be okay with knowing that I truly gave myself to somebody.

And I really loved a person, I experienced that and I know what that feels like — and some people never get that in this lifetime.

Alsina claims he’s speaking his truth to move forward in his life because this affair has put a lot of stress on him and his career.

And I also don’t think that it is ever important for people to know what I do, who I sleep with, who I date … but in this instance it is very different because as I said, there are so many people that are side-eyeing me, looking at me questionable [sic].

I have lost money, friendships, relationships behind it and I think it is because people don’t necessarily know the truth. But I have never done anything wrong.

As expected, Jada’s rep was quick to deny the claims. Her rep says the relationship never happened and Alsina’s claims are “absolutely not true!”

So yeah, who knows what to believe. It’s entirely possible this dude is just making all this up to get his name in the headlines. But it’s also possible that the relationship did happen. I mean, the Smith’s have no reason to confirm the rumors.

It doesn’t help them at all. Most of America wouldn’t understand such a marriage/relationship, and if anything, it would hurt their career with middle America.