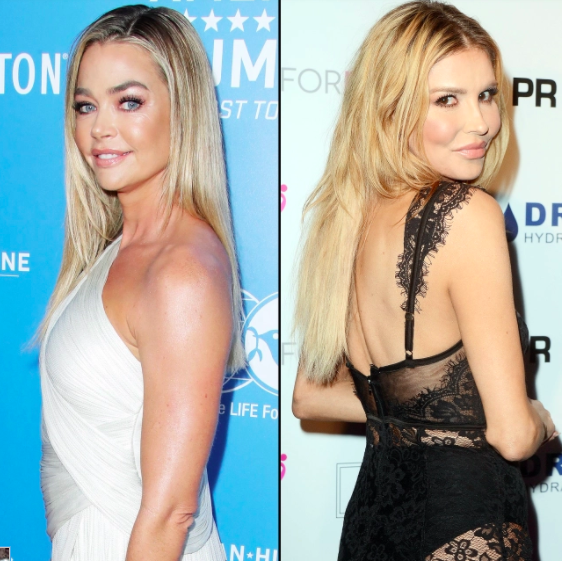 Richards is now a 49-year-old mom, wife, and reality star. She has starred in the recent seasons of Real Housewives of Beverly Hills, and according to multiple insiders, she’s developed a romantic connection with her co-star Brandi Glanville.

The lesbian affair rumors first started to spread back in January. Sources at the time said Richards had stopped filming on the show, due to the rumors.

Glanville told the cameras the following…

I f–ked her, woke up the next morning [and] she said, ‘[My husband] Aaron [Phypers] can never know this. He’ll kill me.

Richards denied the claim, saying, “What the f–k? That is not true!” and the rumors kinda went away for a bit, due to all the pandemic drama.

But just the other day, Glanville reignited the affair rumors by posting a photo of herself kissing another woman on the cheek. She confirmed to the Twitter world that the woman in the photo is indeed Richards.

During an interview on The Talk earlier this week, Richards talked a little about the rumors…

I love for things to play out on television instead of social media. But the stuff that’s been out there, I have been through it in the media with different claims being made. So for me, personally, this is like kindergarten. I’m, like, whatever. We’ll just let it play out on the show, it is what it is. … I can’t speak for anyone else.

Honestly? Sounds like they’re just trying to bring up the ratings. They’re probably both in on it. It’s a smart move.

BUT WE’RE NOT FALLING FOR THE SH*T! That “kiss” ain’t nothing. I’ve had more passionate kisses with my mother-in-law.