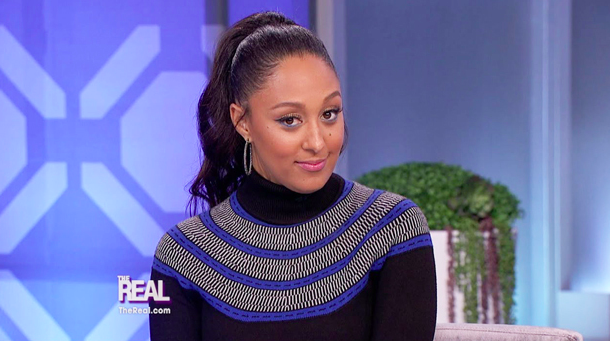 Did Tamera Mowry Leave ‘The Real’ Because Of Massive Salary Deduction? She Says NO!

Last week, fans of ‘The Real‘ got a ~real~ shock when it was announced that Tamera Mowry-Housley was leaving the show. She had been a part of the cast since the show debuted back in 2013.

When the news was first announced, Tamera made it seem like she just wanted to move on with her career, and perhaps focus more on acting again.

She sent out the message you see below…

I had NO intention to talk about this today, especially in light of the news of my dear friend Naya, but now some reports are coming out and I’d rather you hear it from me first.

Not long after she made the post, reports came out from “sources” who claimed Tamera was actually leaving the show because she was asked to take a pretty big salary reduction. Some reports claimed her salary would have been cut by millions.

But during a recent Instagram live session with her husband, Tamera told her fans that her leaving the show had nothing to do with money.

It’s all positive. Nothing bad. Somebody came through my DMs talking about salary stuff. It had nothing to do with that. Nothing, nothing, nothing. No more explaining about that. Everyone’s good. Everyone’s on good terms. Life is the best that it can be right now.

I don’t know, man. Who leaves a talk show on network television to do a Hallmark movie? That sounds suspicious to me.

I think that she was asked to take a salary cut, and she decided it wasn’t worth it anymore. I’m sure it takes up a lot of her time, you know? They film daily. She wants to be paid for it. I don’t blame her for that.

But be honest with your people, Tamera! No one believes you left The Real to do a Hallmark movie.