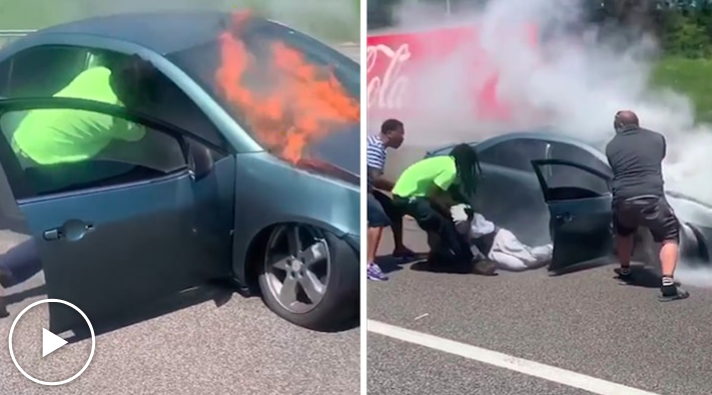 Let’s end this drama-filled week with a little bit of good news, yeah? The video you see above is absolutely bonkers.

The dramatic rescue went down in St. Louis on Tuesday on Interstate-70. The real life superhero you see in the video is Antonio Morgan. He saw the burning vehicle on the side of the interstate and pulled over to help.

He noticed that the driver was slumped over inside the car, so he opened the door and tried to free him from the burning vehicle.

With flames from the engine licking at his face, Antonio struggled to pull Keilen to safety before realizing he was still buckled in the driver’s seat. After one explosion, Antonio had to step back, but quickly returned to unhook the seat belt and drag Keilen away from the burning wreck.

Another hero came in with a fire extinguisher to help calm things down. After the man was pulled to safety, Antonio and the second hero gave each other a hug, probably knowing they were now connected for life.

Incredibly, the driver did not suffer any major injuries. Just a few scratches. His mom said that Antonio was her son’s guardian angel.