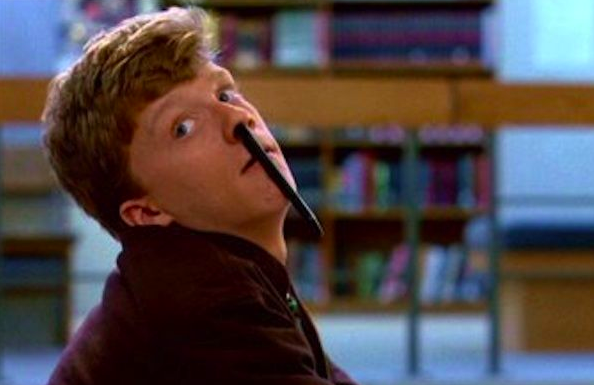 Remember Brian the brain from The Breakfast Club? The lovable nerd who just wanted to impress his parents? Well, it looks like the actor who played Brian grew up to be a gigantic douchebag.

The actor, Anthony Michael Hall, is now 52-years-old. That’s right. It’s hard to believe, but The Breakfast Club was released over 30 years ago.

Hall was with his wife and his assistant Wednesday afternoon at a hotel pool in Austin, TX. They brought a portable speaker with them and a jug of what appeared to be alcohol.

Witnesses claim they were being loud and disrespectful. Hall was blasting his music and cursing in front of kids, so one of the parents said something to him, which caused him to flip the f**k out.

Anthony didn’t respond kindly to that request, and started yelling at the group of pool patrons … making it clear he didn’t care what they thought about his behavior, and accusing them of being in the wrong.

At one point he referred to a woman recording the incident as Rosie O’Donnell. Clearly agitated over her filming, he started splashing water in her direction.

Hotel security was called and Hall was asked to leave the pool area. Police were not called, and that’s a good thing for Hall because he just got off probation from an arrest back in 2016. He was facing time in prison for allegedly assaulting his neighbor in Los Angeles. He pled no contest and got three years probation.

Clearly this dude has some major anger issues. Or he’s stuck in the ’80s and still believes he can do whatever the hell he wants because he’s a movie star. He’s probably struggling with the fact that no one knows who he is anymore.

On a side note though, why the hell is that pool even open? Texas is still in the middle of a big COVID outbreak. People out there just chilling in pools together with no masks? Splashing water on each other like it’s 2019?

THAT’S WHY THIS SH*T AIN’T IMPROVING!