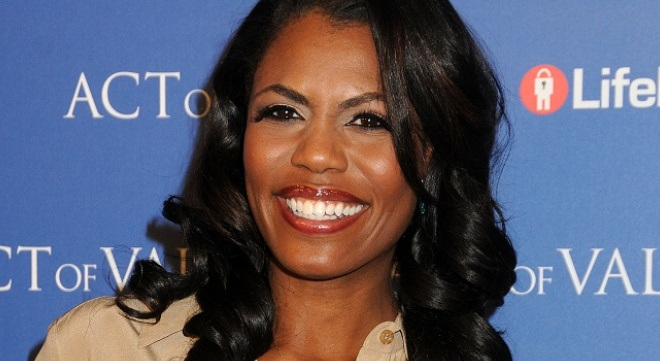 Apparently, Omarosa is still a thing? I thought she had disappeared into the land of forgotten reality stars, but apparently she has a better agent than most reality stars. Omarosa is back on the show that started it all, “The Apprentice” for a special “celebrity” edition. The celebrities include huge stars like, Stephen Baldwin, Lil’ John, Marilu Henner and Trace Adkins. Obviously, all of the “B” celebrities were already booked on Dancing with the Stars.

Anyway, Omarosa is suing La Toya Jackson over nasty comments she made about Omarosa’s late fiance, Michael Clarke Duncan before her elimination on the show. Omarosa visited the Howard Stern show yesterday and had this to say. Omarosa said to Howard Stern,

“She said really nasty things about Michael. She said, ‘He had a heart attack and I know that she caused it. He was on life support and she went and pulled the plug.’”

The comments made by La Toya were extremely upsetting to Omarosa, and were made worse when La Toya repeated the comments on multiple talk shows since being eliminated from the show.

Omarosa has had enough and is now going forward with a lawsuit. She also wants to make it clear that La Toya’s comments are not true. Omarosa said,

“God no, I loved that man…She’s sick and demented. The lawsuit is going forward. We gave her the time to retract it and now we’ll both be spending money on lawyers.”

Meanwhile, a rep for La Toya Jackson claims that they have not received any information about a lawsuit.

I’m sure Omarosa will drag out this story for as long as possible. Anything to keep her name in the headlines!