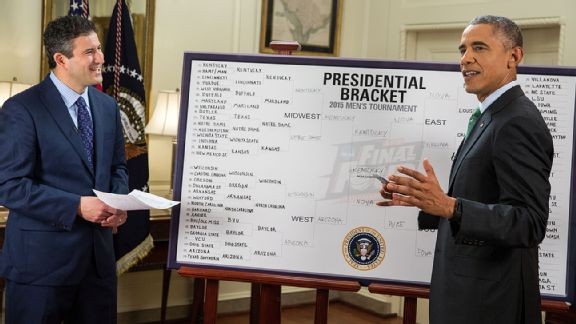 The fact that I like Charlie Sheen doesn’t mean that he is not a complete idiot.  In just 140 characters or less, he proved again, why he has cost himself literally millions and millions of dollars in money and potential endorsements.  Needless to say, he would probably have wasted it on blow on hookers but the point is, he still lost millions.

Sheen seemed to be upset at Obama’s appearance Thursday morning on ESPN’s Sports Center.  This is something that Obama has been doing just about every year of his Presidency.  And just about every year, like clockwork, the Obama haters flex their social media muscles and express how much they hate the President and rant about how there are so many things going wrong with country that they can’t see how Obama could find the time to fill out a Final Four bracket.

The exception here is that very few of the haters have a platform of 11.4 million followers like Charlie Sheen does.

His major gripe (this time) is based on what many are calling an old GOP myth.  He is aggravated at the fact that Obama has time to fill out his bracket and appear on ESPN but didn’t have the time to attend a 2 Star General’s funeral.

Barry Satera Kenya u won’t attend a soldier’s funeral uhkros da street that u kild yet u hav time 4 brackets? s a d c http://t.co/KM1in5MPio

First of all, the incident he is referencing happened nearly a year ago and it was brought to the media’s attention when three White House Representatives attended the funeral of Michael Brown.  The thought was that the Obama administration sent three reps to Michael Brown’s funeral and no one to a General who fought and died for our country.  It was confirmed later that Defense Secretary, Chuck Hagel did indeed attend Greene’s funeral, however it got little media coverage.

I was wrong. It turns out Defense Secretary Chuck Hagel did, in fact, attend the Greene funeral, a fact I should have known. Before sending out the tweet, I made a couple of perfunctory checks to see whether Hagel had attended, didn’t see him in the news coverage I read and passed on the information without further checking. If I had looked into it just a bit more, I would have seen, for example, a Stars & Stripes article that specifically mentioned Hagel’s presence. Once I saw that, I sent out two tweets correcting the mistake. [WashingtonExaminer.com, 8/18/14]

So Sheen is not only bringing up old news, but he is bringing up old incorrect news.  I’m not surprised.  This from someone that John Cryer recently said in his memoirs, used to show him pictures of Va-jay-jays on his cell phone during the taping of their show.

I agree with the sentiments of someone who posted in response to Sheen’s tweet,

Charlie you are a moron…put the booze down, learn to spell, stop crying and look your own miserable self in the mirror

All said and done Sheen is worth $125 million.  I’m pretty sure he doesn’t care what any of us or even the President has to say.  With $125 million even when he is losing he is winning.