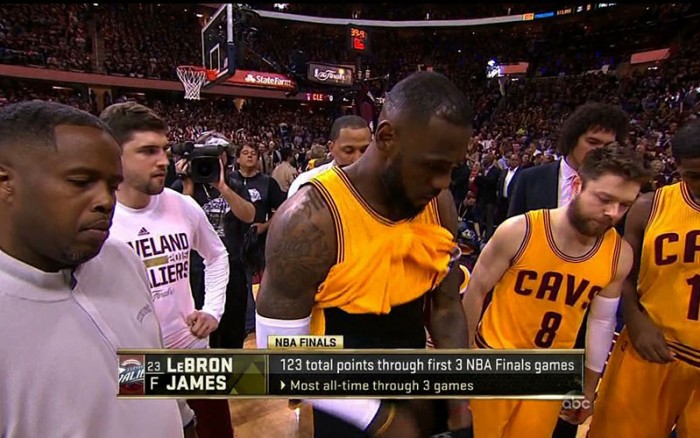 I actually thought LeBron’s “Jumper” was trending on twitter last night, but instead it was LeBron’s “JUNK”. Right at the start of Game 4 of the NBA finals, the cameras zoomed in on the Cavalier’s pre-game huddle. Lebron begin to adjust his uniform right as the cameras focused on his waistband and in a sequence of uniform adjusting events, Bron-Bron gave millions of viewers at home a sneak peak of his MVPenis.

Now before you get too excited, it’s literally a flash and you can barely make anything out. In case you missed it, there is a tweet and a Vine created to memorialize the moment. This Vine was posted 7 hours ago and now has over 4.2 million loops. I’m sure this will break some kind of Vine record when the buzz of Lebron’s Magic Johnson dies down.  (Do you see what I did there?)

The bigger more exciting thing that happened last night was LeBron diving into the sidelines, head first into a cameraman. He hits the camera, literally head-on and busts his head open. He refused to get stitches and his head was patched up by surgical glue, according to ESPN’s Marc Stein

LeBron just told Doris Burke: “No stitches.” But did acknowledge that he’s in some pain and that the wound was closed up by “glue” — Marc Stein (@ESPNSteinLine) June 12, 2015

Immediately after the incident Nike Basketball’s Senior Director Lynn Merritt, can be seen yelling at the cameraman for getting in the way, which was inappropriate because he was really just doing his job.  Here is a clip of the dive!

During the post game conference, Lebron explained that he was hurt but he was going to continue to play,

“I was just trying to regain my composure. I was holding my head and it was hurting, The camera cut me pretty bad. It didn’t matter what was going on with my head at that point, I had to shoot the free-throws.”

Here is the post game press conference…Come ‘On its Friday. You have time to kill. BTW Cleveland lost game four  103 – 82.  It’s now a tied series.