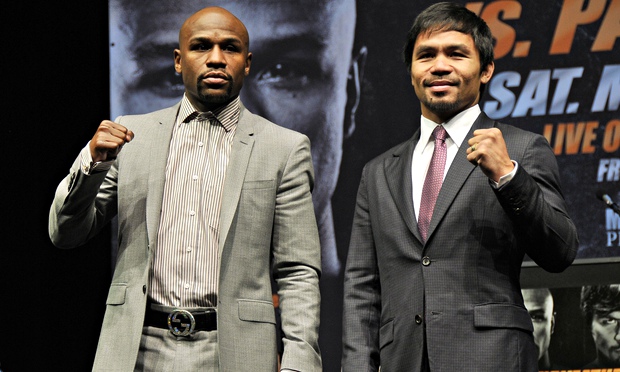 Reports are starting to trickle in that Manny is having some issues with his calf muscles!  At first read this didn’t seem serious however it’s not the concern of the muscle itself that has fans worried, it’s the fear that his training time is being cut short due to the treatments needed to get his calves to a point where he can train.

We are just a little over one month away from the biggest fight of our generation and it was reported last weekend that Pacquiao could not get his road work in on Saturday due to his calves.

His normal running squad showed up around 6:00 AM on Saturday but Manny could not come out and play.  Not only were the runners disappointed but similar to the Rocky films, there were dozens of Pac-man fans gathered a few miles down the road to watch the 36 year old run by.  They too were disappointed.

Pacquiao’s trainer Freddie Roach told Yahoo! Sports that he’s treating Manny with anti-inflammatory cream that costs $1800 per bottle.  The cream is so expensive because Manny doesn’t have US medical insurance and has to pay the full price.  the cream had to be approved by the U.S. Anti-Doping Agency to make sure it was legit.

There’s no magic cure for it.  We’re doing what we can do. I’ve got the doctors working on it. There are some Filipino guys here who are massaging it for him. The cream cost $1,800 for a single bottle. I wasn’t too happy about that.

IS MANNY MENTALLY OUT OF IT

In the USA Today Sports piece they explain that strength and conditioning coach Justin Fortune is also responsible for Manny’s mental game.  There are subtle implications that it was Manny himself that didn’t feel like running and it wasn’t clear that it was just his calf that was bothering him.  Fortune told USAtoday.com,

I would like him to get up and move around at least, get out the stiffness from the work we have been doing.  He is not going to run, but we will make up for it with the work we do later.

I make it hard for him but he needs to suck it up. Fighting Mayweather is not easy, either. There are always consequences.

The intensity of his training sessions will only increase from here.  Rodel Mayol, former WBC light flyweight champion and a member of Manny’s training camp, swears that the old Manny is back,

For this fight it is amazing.  I see he doesn’t get tired, not like before he fought (Chris) Algieri, (Shane) Mosley, Juan Manuel Marquez – then he took it easy. This time he is very motivated.

UPDATE!!
Of course, once this story hit the internet there was damage control. Cramps? What Cramps?

I hope the old Manny is back, because I’m sure Floyd does not need any pep talks…   I can’t wait!!