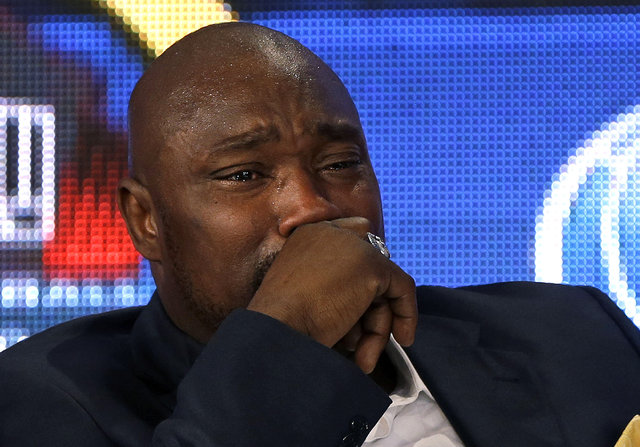 And the dummy files continue: Sapp was arrested Monday morning at the Renaissance Hotel in downtown Phoenix. This wasn’t a sophisticated police sting like NBA analyst Greg Anthony. This was Sapp being a complete jack-ass and getting what he deserved. Authorities said that the 42 year old Hall of Famer, met two women in the lobby of his hotel and took them up to his room. Somehow during the discussion of payment for sex acts, they began to argue. The argument then turned physically violent and spilled into the hallway.  Sapp is a 6 ft 2 in, 300 lb NFL, 1st round draft pick, defensive tackle – he and the words physically violent are a scarey thought.

A statement from the Phoenix Police department stated,

officers working security at a Downtown Phoenix hotel were investigating a noise disturbance when they were contacted by a female alleging she had been assaulted.

Here is where things really get silly…..

Warren admitted that he was involved in the act of prostitution but denied that he assaulted the females. I am assuming that Sapp did not retain an attorney due to his quick admission.  Both females suffered injuries that were consistent with some type of struggle.

FROM BAD TO WORSE….

Sapp was in Phoenix to cover the Super Bowl on assignment. As we all know that despite football being a game, the NFL don’t play. Sapp was promptly fired from the NFL network.  Spokesman Alex Riethmiller said, in a statement,

Warren Sapp’s contract has been terminated and he no longer works for NFL Network.

After the news hit the internet so did some of Sapp’s enemies. Jeremy Shockey took to twitter to provide some colorful comments:

Just heard from My SOURCE Warren Sapp charged with Soliciting a Prostitute! Damn so Sad http://t.co/qA89qke9xw

Eric Weddle also had something to say. Weddle’s comments come from a tweet that Sapp sent back in 2011 concerning his 8 million dollar contract. Sapps’ tweet was “8 million a year for a safety you couldn’t pick out of a line up. Eric Weddle responded with this gem, while referring to Sapp’s mean tweet to him,

This was the second time that Sapp has been arrested at the Super Bowl. He was arrested in South Florida in February of 2010 while working as an analyst for the NFL network. He was just suspended then, and the woman did not file charges.

This sucks for Sapp who filed for bankruptcy in 2012. Although he made a reported $40 million during his football career, he currently has a negative net worth.  He owes the IRS, his four baby mothers and debtors over $7 million while his asset worth is only $6.5.  Ironically the job he just lost was paying him a $500,000 annual salary.  His last name and financial status now become very descriptive of him and his this situation. Poor Sapp. (See what I did there?)