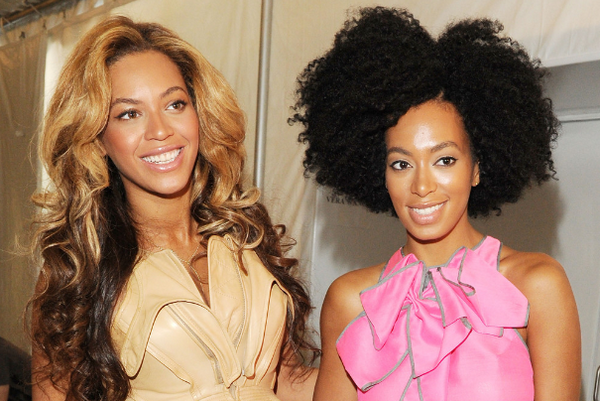 According to Wikipedia, Beyonce Knowles-Carter is a 34-year-old singer/songwriter. She was born in Houston, TX, and has been married to Jay Z since 2008. Four years later in January of 2012, she gave birth to her daughter Blue Ivy Carter at a hospital in New York. She has a mother named Tina (eat the food) a father named Mathew, and a sister named Solange.

But according to a small (and passionate) group of people on the internet, Beyonce is in her 40s, she’s working for the devil, she was never pregnant, her sister Solange is actually her daughter, and she is responsible for the death of Joan Rivers.

Hard to believe? Well, maybe you’ll change your mind after reading some of the, uh, facts.

No. 5 – Beyonce Hired Someone To Kill Joan Rivers

We all know Beyonce is the most powerful woman in the music industry. She can demand almost anything she wants, and people will give it to her without asking any questions because she is Queen Bey. If you think I’m exaggerating, just take one look at the absurd requests on her tour rider. All her crew members must wear 100% cotton, she’ll only drink out of $900 titanium straws that are designed to drink a special alkaline water, and she’ll only wipe her a** with red toilet paper.

But does she have enough power to have someone killed? The internet thinks so. Many people believe Joan Rivers’ death was an Illuminati sacrifice. They believe she was killed to please Beyonce. You see, Joan Rivers died on September 4, 2014, which was Beyonce’s 33rd birthday (her alleged birthday, at least) and that’s interesting because Rivers was born in 1933 and died at the age of 81.

Do you see the connection in numbers? Beyonce was born in 1981 and she turned 33 the day Rivers died. And if you’re still not convinced, you should know that Rivers’ final tweet was a joke about Beyonce and Jay Z’s relationship… If I die tomorrow, you all know who did it. No. 4 – She’s Working For The Devil, And She’s Always The Employee Of The Month

This conspiracy connects with the alleged sacrifice of Joan Rivers, and it’s probably one of the most popular conspiracies following the superstar around. People believe Beyonce is in deep with the Illuminati: a secret organization that basically takes orders from the Devil. In fact, some completely rational people believe she’s trying to make us all worship the devil without even realizing it. They point to her Super Bowl performance as evidence, which was reportedly filled with satanic symbols and imagery.

I don’t know about you, but I think this is 100% legit. I’ve been staring at her hands in the photo above for 5 minutes, and I already want to drink a gallon of blood. #TheThirstIsReal No. 3 – Solange Is More Than A Sister

Remember when Solange beat the hyphen right out of Jay Z in an elevator for allegedly cheating on Beyonce? Did you wonder, “Why is she so angry? It’s her sister’s mess.”

Well maybe she reacted so violently because Beyonce is actually her mother? It seems impossible, right? Beyonce is 34-years-old and Solange is 30-years-old. HOW WOULD THAT WORK? IS BEYONCE EVEN HUMAN?

Calm down. The explanation is quite simple. Beyonce is lying about her age, which isn’t that hard to believe. There have been several questions about Beyonce’s age throughout the years. Someone who worked for the Department of Health in Texas claims she saw her birth certificate, and it showed her birth date as 1974. But even if that employee is telling the truth, Beyonce would have still only been 11 or 12 when Solange was born.

The pregnancy truthers believe Bey-Not-Even-Once got pregnant when she was a teen and her family covered it up by claiming the baby belonged to her parents Mathew and Tina. It’s an interesting theory and would be amazing if it was true.

But it’s probably not. There are pictures of Beyonce and Solange together as kids. I guess it’s possible they could be altered, but then why do we believe anything? Maybe we didn’t go to the moon. Maybe your grandmother really did sleep with Elvis the day before he died. It’s all possible. No. 2 – Beyonce Had The Other Members Of Destiny’s Child Change Their Names

Back when LaTavia Roberson and LeToya Luckett were basically kicked out of the girl group, they claimed that their manager (Beyonce’s father) always showed favoritism toward his daughter. He tried his best to keep the spotlight on his baby girl.

It’s certainly possible. When I was seven, I joined a band and I wanted to be called Mr. Butt Face. But our drummer had already picked Mr. Poopy Face, and everyone agreed they were too similar. I had to settle for Booger Brooks.

I could have been a star.

You have probably all heard about this one. Was Beyonce really pregnant? People were already suspicious due to the lack of pregnancy photos, but then things reached a new level when the video you see above was shared online. The rumors started flying then, and Beyonce was forced to respond to the rumors. The strange thing about that is she NEVER responds to rumors. Why was she so worried about this particular rumor?

And as multiple fans have pointed out, her body never seemed to go through the typical stages of pregnancy. Her face remained slim throughout the pregnancy, her feet didn’t swell, it was like the rest of her body didn’t know she was pregnant.

Also, she and Jay Z basically shut the hospital down when she gave birth. No one was allowed on the same floor, and she reportedly showered the hospital workers with gifts. Was she just being nice? Or was she making sure they didn’t talk to the media?

I don’t know, but I’ll leave you with this photo of her bare baby bump. Seems like it would be hard to fake. (or maybe I’m just taking her side because I’m truly worried she might hire someone to murder me. I’m serious.)