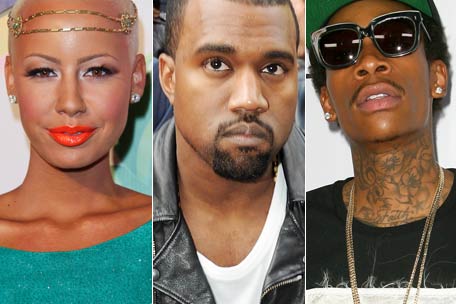 Amber Rose Shuts Down Kanye And Wiz Beef With Kanye Details Only an ‘Ex’ Would Know. We Have All The Deleted Tweets! Yes, Amber Rose destroyed Kanye but only after Kanye went on one of his legendary Bipolar twitter rants. While you were sitting in your cubicle on Tuesday trying to earn a living, Kanye and Wiz were going at it on Twitter. With a new album dropping any day now, any news is good news for Kanye so the more feathers he can ruffle the more free publicity he gets. However, what people don’t know is that this actually started on Monday and that Ye’ wasn’t the first to attack; Wiz was.

Kanye announced late Sunday that he was changing the name of his album from “Swish” to “Wavy”. This is what set Wiz off. Wiz took to twitter to call Kanye out for taking credit for Max B’s “Wavy” style in series of tweets. That was first blood. Kanye answered back with what I thought as a very respectful tweet.

The next day Wiz sent out another tweet and Kanye took it the wrong way….maybe. You be the judge.

Wiz insists that KK is a type of marijuana while Kanye just assumed it was his wife Kim Kardashian.

Take it for what it’s worth, but Kanye saw this and went off. The next few pages are tweets that Kanye tweeted to Wiz, but he goes back and forth and back again. From being angry, mean, vindictive Kanye, to admiring how Wiz looks in a pair of jeans. It’s crazy…Read the tweets….because at the end Amber Rose jumps in and basically quiets all the noise. After her devastating tweet, things got really quiet on Kanye’s side, probably for fear that she will reveal even more…

Here is Kanye’s EPIC twitter rant complete with all deleted tweets. Hit the last page to see how Amber delivered the final blow and as a BONUS we have Kanye’s interview with TMZ yesterday about the whole thing. It was another Bipolor-esque type of moment. If this genius? Or Crazy? Jump to the Kanye Memes