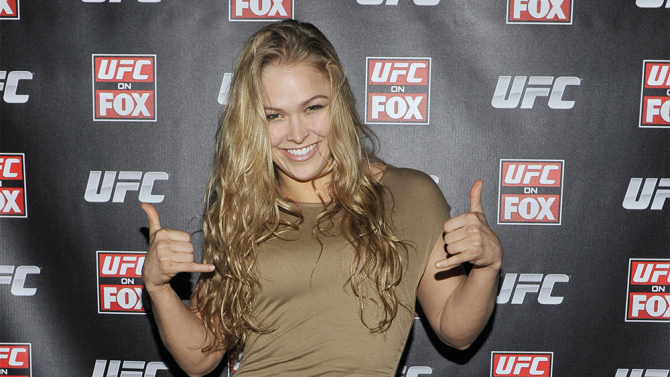 Whenever a woman emerges to be a force in any pugilistic sport, it brings up a host of men showing just how small their “members” are. As they began to feel inadequate they start shouting that a woman couldn’t beat a man in a fight.

It happened with Leila Ali when she was still actively boxing and it’s happening now again with Ronda Rousey. To make a blanket statement like that is just ignorant because I’m sure you can find a woman big enough and strong enough to beat up a man and vice versa. In fact Rousey is skilled enough to probably take on many men her size who are not professionally trained fighters. This is what the host of Tru MMA, Aaron Tru found out.

Aaron should have known better. Not only because he’s a white belt (which just means he paid tuition somewhere and brought a uniform) but it’s because he is an MMA personality and knows there subtleties in the sport that make it much more dangerous than casual fans think. These fighters look dangerous when fighting each other but they are 10 times more dangerous against untrained fighters. That’s like how NBA players look tall standing next each other, but standing next to a regular person the difference in size is ridiculous. Aaron felt just how ridiculous that difference is when Rousey threw him to the floor. Rousey won a Bronze medal in the 2008 Olympic Games in Beijing. That skill level versus someone who actually says he’s wearing a white belt is nothing to play with.

On the flipside, she is also skilled enough to perform a throw like that without hurting the victim. This leads me to believe there was a little intent there.

SHE WILL NEVER FIGHT A MAN

I like Rhonda because she is handling fame and all the asinine conversations that come with it quite well.  Even after beating Cat Zingano at UFC 184 in just 14 seconds she stills says that she will never fight a man and for all the right reasons. During a recent interview with MMAFighting.com she says,

“I really just don’t think that any athletic commission on Earth would ever condone something like that. Fights are going to go both ways. You’re going to see both people hitting each other. I don’t think we should celebrate a man hitting a woman in any kind of setting.”

Here is the painful video. The good news for Aaron Tru is that it’s already racked up 3 million views in just a few days. I hope it was worth it.