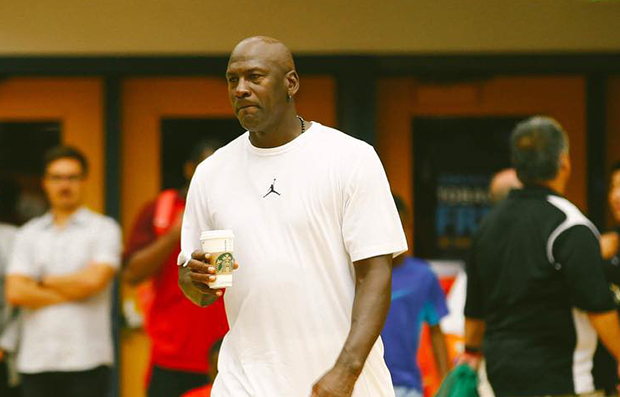 WATCH: Jordan gets hit with a “What are Those?” From a Camper And Has An Epic Response (VIDEO) For those sneaker heads and Meme lovers, the question “What are Those” is not only familiar but a phrase you have integrated in your daily vocabulary.  For those unfamiliar, it’s a phrase that is used to call out shoddy footwear.

The phrase originated when a vine, that has been since viewed over 30 million times hit the internet depicting a police officer wearing those crappy, department issued, high top black boots.  The officer is called out by a bystander point and yelling “WHAT ARE THOOOSE”.  The phrase spread like….like…well like a viral meme.  It even hit Korea and then found it’s place in the urban dictionary.

This is what you say/scream when you see someone wearing shoes or other footwear that are dirty and/or non-brand unknown. You should also point your finger in the air then while saying “what are those?!” Make your way down to the person shoes, all while their back is turned.

Here is the original Vine that started it all…

Now that you know the background of the phrase, you understand the impacts of this young buck calling out the G.O.A.T. in both basketball and the sneaker game.  The Jordan brand is the reason why most sneaker heads became sneaker heads.  To call Jordan out on his footwear is insane, bold and just dumb; but remember, he’s just a kid.  This all happened at summer camp in Michael Jordan’s Flight School.

In the video after the kid calls MJ out, you can see MJ talking to the kids sitting nearest to him.  He quickly gets educated on the phrase and then he responds. Watch the clip.

In case you didn’t hear Jordan that clearly. He replies,

Hey, look man, I’m lost on that Vine stuff. What are those? These are XX9 Lows.

The crowd went wild because Jordan was wearing sneakers that nobody had ever seen. In fact no one knows when they will be for sale, if at all.  Jordan wore two pair during the camp.  These sneakers are so exclusive they might be made and remain only for Jordan himself.  If you don’t think those shoes are a big deal, visit this link on eBay.  As you can see Jordan’s are going for $30K a pair.  That’s more than the car I’m driving.

The two pair of xx9 Lows that Jordan wore during the camp were one white/gum version and the other a black gradient pair. Here is a shot of what the sneakers look like up close.

WHAT ARE THOSE INDEED!!