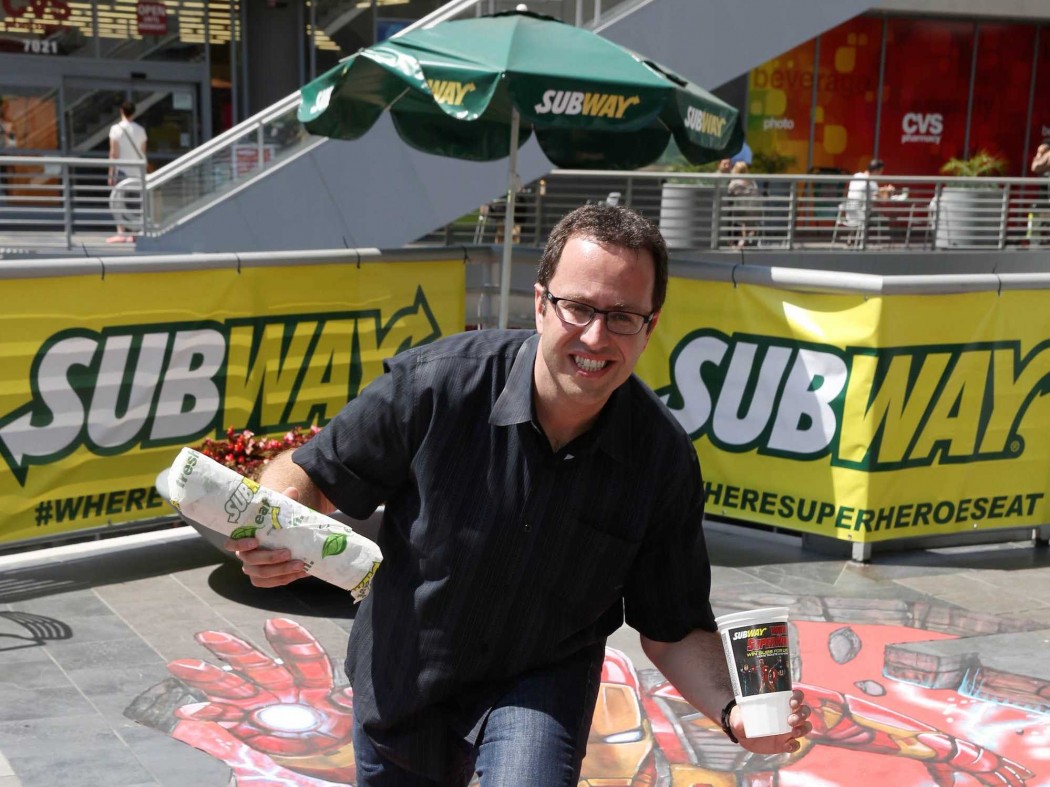 Subway wasted no time at all distancing themselves from the man who put them on the map as a health food chain more than 15 years ago. Tuesday morning at 6:30 AM, the FBI showed up at Jared Fogle’s residence, in Zionsville, Indiana and began to seize his property. They had a huge evidence truck parked in his driveway and bystanders could see electronics being taken from his home and brought inside the vehicle.

Just in case you thought they were a moving company, the authorities were sure to wear not so subtle shirts letting you know that they were not “Two Guys and a Truck”. At some points even Jared himself could be seen entering and leaving the FBI vehicle. (For the record, it looked like he has packed on some pounds…..just saying). Shortly after the FBI arrived, so did the media. With a crime rate of 97 (100 being the safest) and a total average of 2 violent crimes committed a year, I’m sure this was the biggest thing to hit Zionsville since the day Jared moved in. Subway and Jared Fogle have mutually agreed to suspend their relationship due to the current investigation. Jared continues to cooperate with authorities, and he expects no actions to be forthcoming. Both Jared and Subway agree that this was the appropriate step to take.

That statement reads as if Jared called up Subway and said, “Yeah… the FBI are raiding my house. I think it’s a pretty good idea for your image as a company for us to take a break. It’s not you, it’s me. I suggest that you stop sending me checks right when I’m going to need them the most. BTW – I did nothing wrong. I’m sure of it.”

I’m pretty certain that’s not how the conversation went. Subway has help make Jared a multimillionaire. Being discovered in college, he has managed to make his weight loss notoriety a career which has garnered him a net worth of $15 million. This is the only real job he has ever had.

The sandwich chain also stated that they were shocked and concerned,

We are shocked about the news and believe it is related to a prior investigation of a former Jared Foundation employee. We are very concerned and will be monitoring the situation closely. We don’t have any more details at this point.

WHAT THE HELL HAPPENED? FORMER EMPLOYEE?

The unthinkable happened! Child Pornography. Two months ago, Jared’s former executive director of his foundation, Russell Taylor was arrested and charged with crimes related to child pornography. The sicker part is that the Jared Fogle Foundation was created back in 2004, solely for the purpose of helping children with Childhood obesity. During the raid of Taylor’s house, more than 400 tapes were seized of children being secretly recorded in bedrooms and bathrooms of that residence as well as former homes in which the 43 year old has lived.

HOW WAS TAYLOR CAUGHT?

According to court documents, the very married Taylor was texting another women flirtatiously and asked,

“How young are you ok with?”  Taylor then went on to say “I wanted to ask lol.  Keep in mind we do travel to Thailand on occasion.”

That woman then went to authorities and the rest is history.

The question is who is “We” in that Thailand statement. Is “We” him and his wife? He and Jared?

Let’s hope that “We” does not include our beloved Mr. Fogle. This is something that is easy enough to find out. Jared’s attorney told the media that he has not been charged with anything as of yet and is cooperating,

Jared has been cooperating, and continues to cooperate, with law enforcement in its investigation of certain unspecified activities and looks forward to its conclusion,

Let’s just say, the FBI isn’t into doing extra work. They have more than enough evidence to lock Robert Taylor up for 33 years if convicted. The fact that they feel the need to go to Jared’s home strongly implicates that there is some indication of Fogle’s involvement. Although he has had 2 months to throw out anything that could remotely get him in trouble, regardless of what you might think, your internet trail is very hard to erase if not impossible. …and so are passport stamps to Thailand.

Let’s hope Jared is innocent, or he will be getting a different $5 foot long from bubba in cell block D.