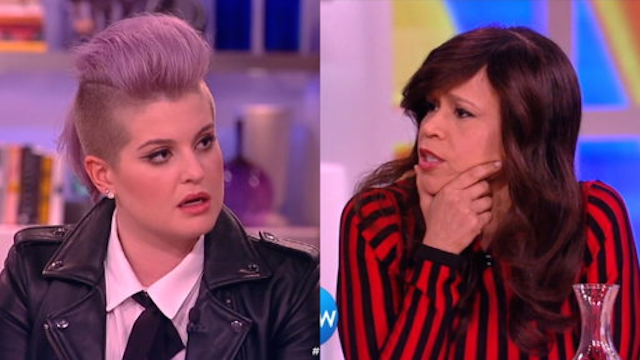 ‘KISS MY ‘BEEP’”! Rosie Perez Storms Off The View After Producers Forced Her to Apologize to Kelly Osbourne. She Vows To Never Return! This has been the messiest season of The View and it’s just keeps getting worse.  It has now been confirmed that Rosie did indeed storm out of the studio after dropping the F-bomb and telling the producers to ‘kiss her Ass’.  Rosie refused to show up for two live shows and a bunch of pre-taped appearances. She was not joking, she is done-done.  What would have been a tearful-joyful celebratory good-bye for both her and Nicole Wallace, has turned into the awkward situation The View has been all season.

Do You remember a few days ago we posted the video of Kelly Osbourne making the racist comments when the panel was discussing Donald Trump? Kelly, with more entitlement then racism eluded that Latinos were toilet cleaners.  Actually, she didn’t elude, she straight up said it.  Here is her exact statement,

If you kick every Latino out of this country, then who is going to be cleaning your toilet, Donald Trump?

Wow.  Every time I read that, it gets worse.  After hearing those comments, Rosie was pretty calm but visibly angry.  As Kelly starts to back pedal, Rosie calmly cuts her off and states,

Latinos are not the only people doing that.

Personally, I’m not sure how else she could mean that.  Consciously or subconsciously she identifies toilet cleaning with a job done only by Latinos.

KELLY BREAKS DOWN AND THE PRODUCERS REACT

During  the commercial break, Kelly begin to realize the magnitude of what she had just said.  She not only put her foot in her mouth, she put her foot, her ankle, shinbone and her leg all the way up to her kneecap.  Sources say, she begin to cry hysterically and said,

Everyone is going to think I’m racist. I can’t believe this

She meant, to say that everyone is going to know that she’s a racist.  The producers then approached Rosie Perez and asked her to apologize to Kelly during the last segment of the show.  And just like the phony Whoopi Goldberg reverse opinion on Bill Cosby, Rosie apologized for basically being correct. Rosie Perez: I want to apologize to this young woman once again for being very sensitive.

Kelly Osbourne: Why? You had every right.

Rosie Perez: Kelly Osbourne is on our side and I was sensitive and my disdain should go to only Donald Trump. Sorry darling

Kelly While Hugging Rosie: No need to apologize to me, I love you Rosie!

After the charade, Rosie stormed to her dressing room.  The producers approached her again and demanded that she now tweet an apology to which Rosie responded,

I’ve already done more than enough by apologizing on air

Yelling and screaming begin and Rosie was now crying uncontrollably.  She eventually ended up sending out the following tweet.

My apologies @KellyOsbourne, I took your point wrong-#Trump #Latinos. My bad. You're heart is so pure & righteous. I adore you. @TheView

After the 140 characters were sent, Rosie then said that she was ‘done with this F** show’, told the producers to ‘kiss her a** ‘and vowed that she was never returning to this ‘shithole of a place’.  Good for her!

ROSIE GETS BACKLASH FROM THE LATINO COMMUNITY

After that tweet however, the Latino community came down hard on Rosie.  She couldn’t reveal exactly why she really sent the tweet so she had to defend herself carefully.  She responded in her own defense,

I tweeted at #KellyOsbourne in an effort to help keep her from spiraling after her unfortunate comment. I went overboard with my … (1/2)

… apology- #mybad. But I don't apologize for speaking up and calling her on it-mistake or not, it was offensive. And please don't… (2/3)

… ever question my support for mi gente… Ever." #boricua #enoughsaid

ABC actually removed the entire broadcast from Hulu and Youtube along with doing sweeps on Youtube removing videos posted by fans.  It was as if the entire thing never happened.  This might be more upsetting then anything.  The producers of The View should stand by principal and not personalities.  They should not try to edit what happened but discuss it.  That would make the show interesting.  This is the first real newsworthy thing to happen and the producers don’t even know how to capitalize on it.

The show has gone from a cornerstone of daytime TV to an embarrassing train wreck.  I think they should be working less on getting just the right players and focusing more on finding new coaches.  It’s not the panel it’s the producers.  I’m sure Bill Geddie is somewhere drinking a Martini and loving every bit of this.  It might be time to give Bill and Barb a call before its too late.

For those of you who missed it – they Bullied Whoopi Too!

– ->Was Whoopi Goldberg Forced to Reverse Position on Bill Cosby to Keep Her Job at The View? (Video)