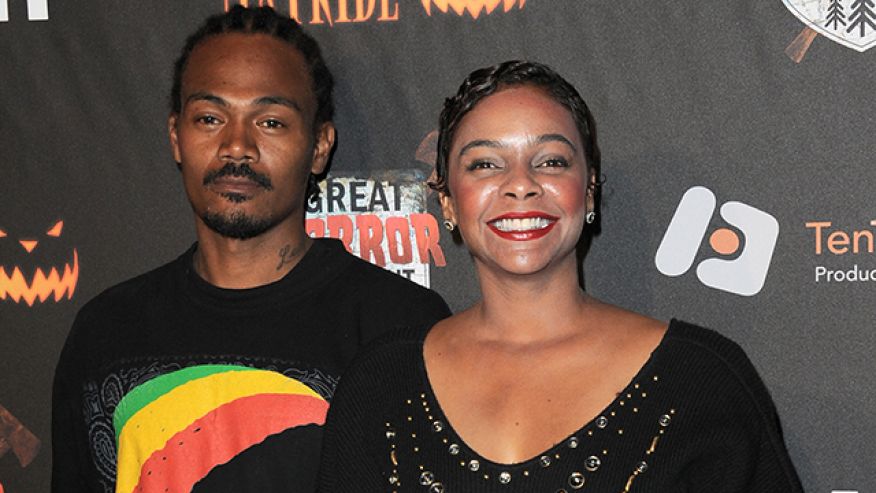 ‘Saved by the Bell’s’ Lark Voorhies Secretly Marries A Man She Met Online; Later Finds Out He Has a Warrant for His Arrest I admit, I used to be more in love with Lisa Turtle than Screech. At age 16, she was the crossover icon of beauty for teenagers. (Her and Stacy Dash – another wack job.) Even as she transitioned into adulthood, she was on an episode of ‘Martin’ and she had recurring roles on both Days of Our Lives and The Bold and the Beautiful and she looked even better. Then….then…something happened and her face got all Sammy Sosa’d out!

Then she went to war with her hair and lost. After that fight, her weight wanted a piece of her, so she fought the battle of the bulge for a few years. Needless to say her post-Saved by the Bell Career has been more Dustin Diamond then Mario Lopez. However, new pictures of Lark have surfaced and it appears that her weight and her hair are under control and things are starting to look up. Right? Well…almost.

Her life choices are now being called into question. Early this year, the 41 year old decided to get married. She met a music engineer on facebook and after that one year relationship the two decided to get married in Vegas on April’s Fool’s Day. Pictures of their nuptials have been posted online. As you can see, it was a swanky affair. Voorhies wore her best floppy Kentucky Derby hat and her new husband Jimmy Green wore his cleanest pair of jeans and decided that the button down plaid shirt would be the best compliment to the jeans in effort to memorialize the occasion. A commitment ceremony was held on April 1 while a Vegas chapel ceremony (complete with marriage license) was later held on April 30th.

To be fair, the two plan on having a bigger official wedding next year. UH-ROH; GREEN HAS A WARRANT OUT FOR HIS ARREST

While the ink on their wedding certificate is drying, Green is facing an arrest from an incident that took place in Arizona back in 2012. According to police reports obtained by my heroes at TMZ, Green purchased a cell phone that he wanted to return for some reason. The store owner refused to let him make the exchange and Green became angry and subsequently through the phone at a wall. He then threatened the store owner by saying,

I’m going to break the store and kill you

The store owner went to the authorities and Green was charged with disorderly conduct and making a threat. Green failed to appear in court for the hearing and a warrant for his arrest was promptly issued.

A rep for the couple told People.com,

This rumor was actually started by her own mother back in 2012 who lived with Lark at the time. Voorhies further fueled the BiPolar flames with a statement

“I have no worries myself, nor do I exude, exhibit or possess within my living status any reason why someone should worry [on] my behalf,” she said. “It’s completely fictional.”

I think that statement made matters that much worse. Let’s hope Jimmy and Lark work out for the best.

And for those young dudes drooling over famous women and don’t think  you will ever have a shot….look at Jimmy Green.  I’m sure he didn’t think he ever had a chance either.