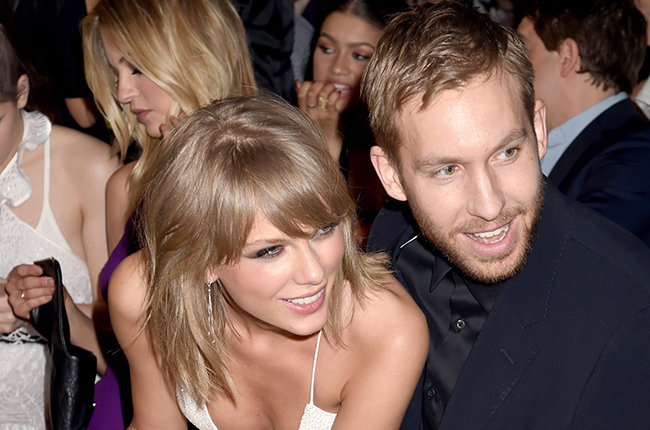 How Are Taylor Swift And Calvin Harris Making Their Relationship Work? Details Inside! We are sure you all know it by now. Taylor Swift and Calvin Harris are Hollywood’s hottest couple. You could probably make a “Where’s Taylor Swift & Calvin Harris?” book with all the photos of them floating around. Going on dinner dates, attending award shows, riding a giant swan together, the list goes on and on.

It’s obvious Swift and Harris love spending time together, but how exactly are they doing it? They both have extremely busy schedules, so how are they making this relationship work? A source close to the couple claims Swift has a private jet, and she’s not afraid to use it.

Whenever she has a break in her tour, she flies on her private jet to meet up with him. (They) are spending every free day they have together.

Must be nice, right? Just to call up your lover and be like, “Hey, boo. Be there in a few hours. I’m on my private freakin’ jet!” The source also adds that Taylor feels very safe with her new man…

Taylor feels very safe and secure with Calvin so she usually doesn’t have her bodyguard around if Calvin is over. Sometimes she will leave for a few hours and go on a hike with friends or go to a business meeting, but they always meet up again later in the day.

Of course she doesn’t have a bodyguard hanging around her house while her boyfriend is over. Wouldn’t that be a little awkward? Unless the bodyguard just stayed outside the entire time like a guard dog. Hopefully they at least give him some water.

Things are about to get a little more difficult for the couple. Swift will be touring all summer, and on June 19 she begins the European leg of her tour, but the source claims they will make things work…

She is planning on having Calvin join her in certain cities and also will be bringing him to her beach house in Rhode Island.