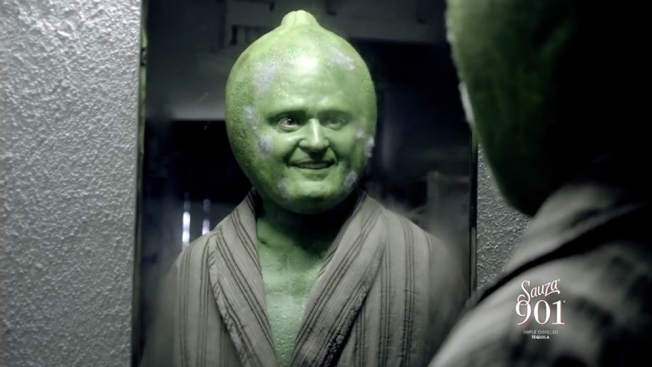 WATCH: Justin Timberlake is in a Lime Costume and it’s Pretty Entertaining! (Video) When I first glanced at my cell phone, I said to myself, “Who does that Lime look like”. The first thing that came to my mind was Jim Carrey in “The Mask”. Then after thinking a little bit harder, it hit me “That’s Justin Timberlake!!” I was right.

Timberlake not only stars in this ad for Sauza 901 Tequila, but he also came up with the concept. By the way…did I mention he owns part of the Tequila company as well?

Timberlake purchased the company back in 2009 when it was just called Sauza. He then teamed up with Beam Inc. (of Jim Beam) and rebranded it “Sauza 901”. The 901 was to represent his hometown of Memphis, Tenn. This investment put Timberlake in the premium liquor business along with Diddy and Clooney. Although the branding was changed and Timberlake became the face of the drink, the taste has not been modified.
Here is 1 of the 2 spots (the second is below)

It took Timberlake six hours each day of filming to become the anthropomorphic star of that commercial, Rick “Sour” Vane. This is just one of the commitments Justin has made to protect his investment. According to the Beam’s global chief marketing officer Kevin George, Timberlake is very hands on,

He’s not just the face of the brand but has been involved in everything from creative to liquid development, activations, bottle design, everything,” says George. “We have regular meetings with him and his team around strategy and brand direction.

This ad is stark contrast to the Diddy campaigns where celebrities are popping bottles on yachts and toasting in fancy night clubs.  Have you seen that Ciroc commercial?

This is risky if the brand wants to be taken seriously, however the campaign has already had a viral effect.  Kevin George also recognizes that challenge,

One of the tough things in marketing is to make premium look fun. But Justin is someone who can easily portray a premium image without being pretentious.

He also mentioned he had his reservations

He came in and said, ‘Here’s what I’m thinking,’ and right away we knew it was something completely different for the category.  Our meeting was literally an hour long, and in that short time we decided to make it happen. Did I have some reservations? Absolutely. But at the end of the day, we decided to figure it out and get it done. It’s been a great collaboration, but it largely comes from his idea and the tone he wanted to set for the brand.

To help counter the comedy, Timberlake also tweeted a video taken from an office setting but even that is pretty funny.  In the video apologizes essentially for not using limes and crippling the lime industry.

It will be interesting to see if this marketing approach pays off in dollars as it has in Youtube views.